One of the newest bonobos at the Des Moines-based Ape Initiative, Clara, asked for and received a “tummy rub” from research coordinator Amanda Epping through protective glass on Jan. 3. 2020. (Photo by Perry Beeman/Iowa Capital Dispatch)

The nonprofit research center Ape Initiative in southeast Des Moines plans to expand its educational outreach and research projects and is considering the addition of public trails and riverside resting spots.

The internationally rare bonobo research facility is educating Iowa students and international students on topics that are at the heart of the STEM education initiatives emphasized by Gov. Kim Reynolds and others in Iowa’s state government.

The initiative, located on a 230-acre city-donated site near the Des Moines River east of Easter Lake at 4200 Evergreen Ave., originally opened in 2004 as Iowa Primate Learning Sanctuary. It was the brainchild of Des Moines businessman Ted Townsend, who covered most expenses, and eventually operated under various names that included Great Ape Trust.

The goal was to conduct research and educational programs involving great apes, especially involving communication and other cognitive abilities such as memory. Bonobos are very close to humans in genetic makeup and similar to chimpanzees. Some of the bonobos in Des Moines understand some English words and can communicate through the use of abstract symbols known as lexigrams, displayed on paper or on computer touch screens.

Now, the center is helping both researchers and students from kindergarten to graduate school, said President and Director Jared Taglialatela, who splits his time between Des Moines and his post at Kennesaw State University in Atlanta.

Here’s the latest from a facility that has drawn interest from outlets ranging from National Geographic to Time Magazine over the years:

— New bonobos. The current staff led by Taglialatela quietly welcomed two new bonobos in recent months, forgoing the fanfare that greeted previous arrivals. Clara, born at the Cincinnati Zoo and Botanical Garden in 2010, arrived at Ape Initiative in May 2019. Mali, who was born at the San Diego Zoo in 2007, came in November 2019.

— Expanded educational efforts. Ape Initiative has launched educational programs with Des Moines schools’ Central Campus, Drake University, Grinnell College, scouting groups and other organizations. There is still no regular public access to the facility, though Taglialatela hopes to find a way to offer at least limited access to a facility that wasn’t built for self-guided visits like those at zoos.

— Scientists paying the bills. Researchers are footing most of the bill for the center’s $300,000 annual budget, paying for access to the great apes. The center’s research involving bonobos is among the most expansive in the world, in part because of the heavy emphasis on cognitive work and the sheer size of the sprawling concrete pad the seven bonobos call home, Taglialatela said. (At one time, the facility was a $4 million-a-year operation, but it struggled to attract research grants to replace Townsend’s private funding.) Researchers and graduate students have come from Harvard University and schools in Texas and Michigan recently.

— New public spaces. There’s talk of adding some kind of public space along the Des Moines River for canoeists and kayakers who may venture south of downtown’s planned whitewater runs and water trails.

— Drake eyes trails. Keith Summerville, professor of environmental science and sustainability at Drake University, is working on a proposed trail system for parts of the campus that are outside of the 10 or 15 acres the bonobos usually use. Summerville has worked on a reforestation project aimed at aiding a confined chimpanzee project in western Rwanda, a project Townsend and is Great Ape Trust crew started. (Note: Iowa Capital Dispatch senior reporter Perry Beeman spent six weeks in Rwanda in 2009 on an International Reporting Project fellowship while working at the Des Moines Register and filed stories and this video.) 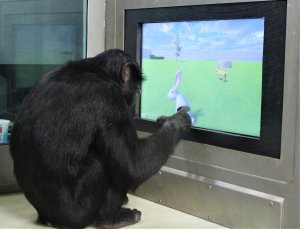 Teco, the only member of the Des Moines bonobo group born at what is now called Ape Initiative, a research center, “catches” a rabbit in a software exercise that earned him grapes. (Photo by Perry Beeman/Iowa Capital Dispatch) 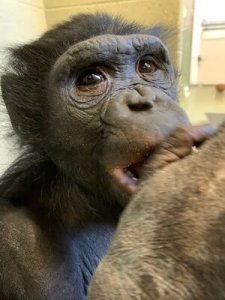 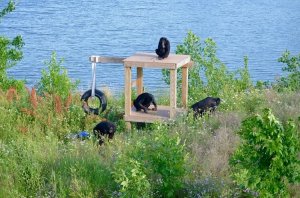 A group of bonobos enjoys warmer times at Ape Initiative, a southeast Des Moines research center that has indoor and outdoor areas for the great apes. (Photo courtesy of Ape Initiative.) 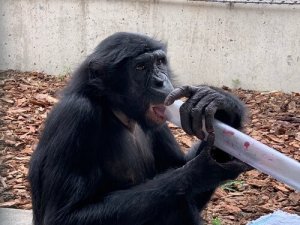 Bonobos are found in the wild only in Democratic Republic of Congo, where an estimated 15,000 to 20,000 of the great apes are left. Ape Initiative, a nonprofit accredited by the Associations of Zoos and Aquariums as a “certified related facility,” works through in an international Species Survival Plan to help the species. Dozens of scientists and students are conducting behavioral and cognitive research on the group.  Ape Initiative considers one of the apes, Kanzi, the worldwide great ape champion at recognizing English words and conducting conversations with the use of abstract symbols called lexigrams.

Ape Initiative reports there are fewer than 250 bonobos in captivity. Founder Townsend cut off funding years ago, with more than a year’s notice, leaving successors to try to raise money. The facility has been helped by regular food donations from Hy-Vee and Anderson-Erickson Dairy, Taglialatela said. “They are eating better than I am,” he quipped.  The menu consists mostly of fruits, vegetables and yogurt.

Mali and Clara were brought to Des Moines because they are maturing sexually. In the wild, adult female bonobos often leave groups to find a new one with males and females for socialization and mating. The move was meant to simulate that natural occurrence.

Bonobo groups are led by females. In Des Moines’ case, that is Elikya, mother of the group’s young male, Teco, who was born at the Des Moines facility. The group consists of four males — Kanzi, Maisha, Teco and Nyota — and three females, Elikya, Mali and Clara.

A visit to the bonobos’ house

When a reporter who has visited the facility many times returned this week, the bonobos had a treat of strawberries encased in blocks of ice. Teco also got some grapes as he worked his way through a computer game that requires him to “catch” rabbits by touching them on the screen. That same software has an application that requires two bonobos to team up to catch a rabbit — another area of new research.

Clara swung on a “vine” made of fire hose and later “asked” research coordinator Amanda Epping to “pat” her tummy through the glass that separates humans and bonobos for safety and health reasons. Kanzi lounged in the back. Nyota, who has been known to spit water at certain reporters, didn’t have a clean shot on this day. So he threw his body against the glass to announce his presence.

The facility has passed all recent U.S. Department of Agriculture inspections and sidestepped rumors that the bonobos would be sent to other facilities as the center continued to try to raise money. The center staff is trying to raise money for an endowment fund for the apes’ care.

Now, Taglialatela said, Ape Initiative is talking with scientists about the possibility of adding up to five more bonobos to the bonobo building. A second large building that used to house orangutans could also house apes again some day, he added.

The facility had tried to get chimpanzees through a government program but that didn’t work out. Townsend once wanted orangutans, bonobos and gorillas at the facility. Now, Taglialatela said, any future additions are likely to be more bonobos — the center’s specialty.

Programs to expand, with care

“We want to continue what we do well and expand responsibly,” Taglialatela said.