For all their sign-waving and news conference comments, environmentalists admitted this week they have virtually no chance of getting even a hearing on their proposed moratorium on large livestock confinements in Iowa.

Emma Schmit of Rockwell City was in town Tuesday in her role as a Food and Water Action organizer, joining Des Moines-based Iowa Citizens for Community Improvement to back a moratorium proposal that went nowhere in last year’s Legislature and hasn’t budged this year, either.

“As a rural Iowan, I’ve seen the negative impacts of the factory farm industry from water pollution to declining rural economies,” Schmit said. When she was done speaking, several other speakers suggested animal confinements are hurting land values, neighbors’ health and quality of life.

When the speeches ended, an Iowa Capital Dispatch reporter asked how many of the 85 Republicans in the 150-member Iowa Legislature had endorsed the proposed moratorium on construction of new confinements or expansions of existing ones.

The answer: One. Rep. Jeff Shipley of Fairfield.

Adam Mason, CCI’s state policy director, admitted that the moratorium bills are unlikely to pass a committee by a legislative deadline at the end of next week. “They’re not going anywhere this year,” Mason predicted in an interview after the event. But he vowed to keep up the fight in hopes that elections will return the chambers to Democratic control.

That might not be enough to turn around a debate that has seen both parties decline to significantly change livestock laws since 2002, when relatively minor changes to the mid-1990s regulations included giving neighbors an extra 500 feet between their dining rooms and manure storage.

Lawmakers have consistently declined to give local county supervisors control of where the confinements are built in their counties. This has caused stress for local politicians who field most of the complaints about odor and the allegations that emissions from the manure stored in deep pits under the hogs, and spread on fields as fertilizer, are making people sick. Many complain they can’t get away from the stench in their house or yards.

When Jeff Vonk, who had been appointed by Democratic Gov. Tom Vilsack to serve as director of the Iowa Department of Natural Resources, vocally supported local control of confinements, Democratic Gov. Chet Culver sent him packing for a similar job in South Dakota.

Farm groups have strongly opposed a moratorium or any significant change to Iowa’s major livestock regulations.

The House bill was sent to the Agriculture Committee, headed by Rep. Ross Paustian, R-Walcott, a farmer who has been active in the Scott County Pork Producers Association. The legislation hasn’t moved, and Republican caucus staffers don’t expect it to. Paustian didn’t respond to an email late Thursday afternoon.

Rep. Dean Fisher, R-Montour, a retired cattle farmer and chairman of the House Environmental Protection Commission, which has considered similar bills, said a moratorium would be devastating to the Iowa economy. “The bill is going nowhere,” Fisher said. “It’s a dead issue. It has no merit, would be disruptive to the industry, and would do nothing to improve the environment.”

Activists pushing for the moratorium seem to want pork producers to raise hogs in open feedlots as in the past, Fisher said. That would subject streams to more runoff pollution than storing the manure in confinements and spreading it based on management plans, he added.

The fact that the number of streams in Iowa with naturally reproducing trout has risen shows the current regulations are working, Fisher said.

Eldon McAfee, lawyer for the Iowa Pork Producers Association, said, “IPPA is obviously and absolutely opposed to any moratorium on building or expanding confinement operations. We have extensive regulations in place since 1995 that properly regulate the siting and construction. Those regulations have been followed and a moratorium would be devastating to agriculture and beyond that to Iowa’s economy.”

Over the years, the state passed a “master matrix,” a scorecard counties can require of confinement developers that is designed to encourage environmentally friendly practices. Critics, including CCI, say the matrix awards points in some cases that are the equivalent of getting a passing grade in class by showing up. Efforts to change it have stalled as lawmakers feared opening a wide debate. Rep. Fisher says the system has worked well.

Moratorium supporters endorsed House File 2127 and a pending Senate companion bill by Sen. Claire Celsi, D-Des Moines, who is tweaking last year’s Senate File 518. Neither one has advanced. The deadline for most bills to clear a full legislative committee to stay alive is the end of next week.

Celsi said at Tuesday’s news conference that she is disturbed by out-of-state companies fouling Iowa’s landscape and waterways.

“There’s something that you need to know about the state corporations that are coming in here to make money, and then dump, literally, you know what, on our fields,” Celsi said. “The economic growth of Iowa is slower than that of our neighbors. And what does that tell you: Big corporations are making money and they’re taking it out of state because they’re out-of-state corporations, most of them.” 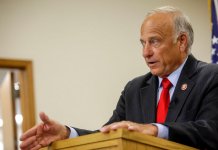 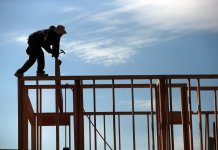