Senator: ‘I’m going for the gusto’ on medical cannabidiol update

A light-up CBD sign outside of “Despensary,” a cannabidiol shop at 219 4th Street in Des Moines. (Photo by: Linh Ta/Iowa Capital Dispatch)

State Sen. Brad Zaun said Tuesday it’s one of his top priorities to pass a “strong” update to Iowa’s medical cannabidiol law, despite continued divisions among Republicans over how strong the medicine should be.

The main dispute remains the amount of THC that can be dispensed.  That’s the psychoactive compound in cannabis that is also attributed to positive health effects in some patients. Current law has a 3 percent THC limit. Gov. Kim Reynolds last year vetoed a bill that would have raised that limit to 25 grams over a 90-day period. 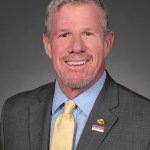 “I’m going for the gusto on this bill,” Zaun, R-Urbandale, said.

He added after the meeting: “This is what I truly believe needs to happen for the people that are suffering in the state of Iowa.”

He said he believes the 4.5-gram limit recommended by the state’s medical cannabidiol board and contained in legislation in the Iowa House is too low.

He said he realizes he’ll have to make compromises on the final bill. “It’s like making sausage around here. This is where I’m at and this is where I want to start at,” Zaun said.

Sen. Joe Bolkcom, D-Iowa City, who attended the subcommittee meeting, said he thinks Zaun has a good bill but he’s frustrated that GOP lawmakers have been unable to find consensus over the past four years. Noting the legalization of marijuana in Illinois, he said, “I’m concerned that the people who have made investments in Iowa are going to lose customers to Illinois where people can get more effective medicine that costs less.”

Zaun said he believes he has the votes to advance the bill through the Senate Judiciary Committee before this week’s funnel deadline for committee action on policy bills.

Senator: ‘I’m going for the gusto’ on medical cannabidiol update