As the focus has shifted to reopening the state during the COVID-19 pandemic, Gov. Kim Reynolds and her administration have placed an ever-growing share of responsibility on Iowans to make their own decisions about their safety.

That has left many Iowans to play amateur epidemiologist, poring over data provided by the Iowa Department of Public Health. The information has been selective and difficult to use from the beginning. A redesign of the state’s coronavirus website last week made some key figures ─ including the daily number of coronavirus deaths ─ even more difficult to track.

“It’s just become so frustrating over the past several weeks now,” said Joe Gorton, an associate professor of criminology at University of Northern Iowa.

Gorton isn’t an epidemiologist, but he crunches numbers for a living. He deals regularly with statistics and modeling.  And when Iowa first started reporting coronavirus data, he started tracking and graphing the information and sharing his observations with reporters.

At first, he said, he perceived a good-faith effort at sharing information with Iowans.  Now, however, the data provided by the state seem to provide more questions than answers.

“I always try to be careful not to ascribe motives to people — most of the time you’re wrong,” Gorton said. “… But I’ve come to the conclusion what the Reynolds team is doing is (providing) just enough information to have plausible deniability against complaints of lack of transparency.”

For example, Gorton said, there’s never been a data-driven answer as to how and why data on the use of hospital resources has been aggregated into six, multi-county regions.  The point scale that Reynolds was using to determine the appropriate level of mitigation measures seemed arbitrary at best, he said.

Now, that point system appears to have been abandoned, or at least has disappeared from the IDPH website.  So has the daily death toll.  When the website was redesigned last week, a person would have to subtract the total number of deaths to date from the previous day’s total, if they could find that number in the media or some other source.

The question of whether or when Iowa will reach the “peak” of cases is also mystifying Iowans.  The “peak” is reached when new cases reach their highest level and start to decline. Expanding testing, while a good thing, has made it impossible to tell whether an increase in cases can be explained by increased testing or by the governor’s decisions to reopen businesses. It’s been a moving target, from the end of April to mid-May and now, who knows.

“Flattening the curve” of the virus spread has been a critical goal aimed at preventing overcrowding of hospitals. But the state, until recently, reported only regional data on the rate of hospitalization, the number of COVID-19 patients in intensive care units and the number using ventilators.  And those numbers have consistently appeared as if each region had plenty of hospital capacity.

But that won’t tell Iowans whether their local hospitals are overwhelmed. In Region 3 in Northwest Iowa, for example, the state reports there were 104 patients hospitalized as of Saturday morning in the  20-county region, including 42 in intensive care.

The Sioux City Journal reported Saturday that 116 patients with COVID-19 were admitted at the city’s two hospitals as of Friday. MercyOne and St. Luke’s have opened intensive care units in other areas of the hospital and requested additional ventilators and personal protective equipment. They’ve also had to transfer some patients to other hospitals.

The new website reports hospitalizations by county, which is an improvement. But the ICU and ventilator data is still reported regionally.  And the state’s website shows only 77 patients hospitalized as of May 9 in Woodbury County.

Reynolds’ office has put out daily COVID-19 numbers in a news release every single day since the onset of the virus in March.  That stopped last week and apparently will not resume. The message from Reynolds has clearly shifted from claiming data-driven decisions toward political considerations.

“Iowans will make the decision whether they want to go to the (stores) or not but we’ve done it on a very limited basis,” she said Thursday of the reopening of retail stores. “And, you know, just like people are going to the grocery store, this is — you know, it was a fairness issue in really opening up retail statewide.”

Coronavirus isn’t fair and decisions based on fairness are not based on data.

If the decision is up to Iowans, they need better guidance to decide whether it’s safe to venture out or whether they should continue to stay home for their own safety and for the safety of the most vulnerable of their neighbors.

Sharon Pilmer of West Des Moines was a policy analyst for Iowa House Republicans in the 1980s. She said she wants to see case counts by ZIP code, which Reynolds has said can be tracked through Test Iowa. Among other information, Pilmer also wants a better explanation of the state’s “epi curve” or epidemiological curve, “the numbers and slope of which are quite inconsistent with their reported testing data.”

“Partial and inconsistent data leads to erroneous conclusions, at best. It also opens up to question the integrity of the system and those who manage it,” Pilmer said. “We deserve much better and more complete data than we are receiving.”

Even better data won’t help Iowans who lack the time or the skills to puzzle their way through the charts and graphs. What these Iowans need is leadership. And what our leaders are saying is that, in reopening the state without a solid foundation of data, we’re all on our own. What a time to realize we should have paid more attention in math class. 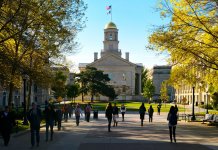