Gov. Kim Reynolds said Thursday that the $26 million Test Iowa program, which has yet to perform the anticipated number of COVID-19 tests, will soon be ramping up its work and responding more quickly to Iowans with concerns.

The Test Iowa program has been beset with complaints about limited access to testing and delays in informing Iowans of their test results. The contractor hired manage the program, Nomi Health, is supposed to be performing 3,000 COVID-19 tests per day, but so far has fallen far short of that goal.

In Nebraska, some state lawmakers have accused Nomi Health of failing to meet the minimum number of  tests to be be performed. In Utah, where questions have been raised about the accuracy of the company’s testing, Nomi Health has declined to join other major laboratories in a joint experiment to confirm the quality of one another’s work.

Reynolds said the program was implemented quickly in Iowa just three weeks ago and acknowledged that it may have “fallen short” of some Iowans’ expectations.

“A lot has happened in a short amount of time,” she said. “Now we’re focused on process improvement. As we continue to ramp up, we’re working on optimizing operations and improving the Test Iowa experience. For those Iowans who had reached out to tell us we have fallen short of meeting their expectations, we hear you.”

She said now that the State Hygienic Laboratory has validated Test Iowa’s procedures, “we expect more tests will be processed more quickly and your results will be delivered on a timely basis. And in the next few days we will also be standing up a dedicated Test Iowa call center where staff experienced with the Test Iowa process can help answer your questions and resolve your issues in a more timely manner.”

Asked whether she believes any Iowan who wants a test can now get one, Reynolds said “we’re probably not quite there … As we continue to build out and we get to a place where we’re really testing health care workers, essential workers, front line workers, first responders, there will become a time, I believe, that we’ll be able to continue to open it up so that if Iowans want to get a test, they’ll be able to do that.”

Asked if she was satisfied with the performance of the Test Iowa contractor, Nomi Health, Reynolds described the state’s relationship with the Utah company as a great partnership.

“I’m proud of the efforts,” she said. “You know, we’ve increased testing by over 800 percent in two months so we’re moving in the right direction. It takes some time to ramp up.”

Asked whether the state will publicly disclose detailed information on the Test Iowa outcomes so taxpayers can be assured they’re getting their money’s worth from the no-bid $26 million contract, Reynolds acknowledged that some aspects of the program are “not acceptable, (but) it’s part of the ramp-up process.” She added that “we’re going to continue to report out the numbers as we have.”

Should all long-term care staff be tested?

When asked whether Iowa intends to follow a White House recommendation that all nursing home staffers and residents be tested immediately, Reynolds referred the question to Iowa Department of Public Health Deputy Director Sarah Reisetter.

“To date, we haven’t mandated that long-term care facilities’ staff be tested,” Reisetter said, “but it is strongly recommended and we’re doing everything we can to make those opportunities available.”

“We have a really high percentage of those (nursing homes) that have already reached out and done that,” Reynolds added.

The governor was also asked about recent changes in the information that her office and the IDPH are making available to the public now that the state is allowing retailers and other businesses to reopen.

When asked why the state is now limiting disclosure of that information, Reynolds said, “It’s not being limited. We’re trying to provide more access to Iowans and we’re trying to do it in a more timely fashion so the data is more up to date.”

Reisetter then said the IDPH is “actively working to provide some more information, the sort of things that you’re requesting. We just want to make sure we do it in a responsible way so that we don’t identify any particular individual.” 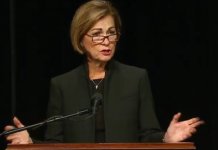