The Des Moines-area transit agency DART has delayed work on a $68 million operations center and an overhaul of its income sources amid COVID-19 disruptions that have included shutting down fare boxes on buses.

Through May, the Des Moines Area Regional Transit Authority, as it is known officially, had lost $1.1 million in revenue this year, said Erin Hockman, chief external affairs officer. The agency, which runs buses, vans, shuttles and other mobility services, has budgeted for $35.2 million in operating revenue.

DART is still adding up expenses for disinfection and other COVID-related work, which continues.

The agency has been approved for a $19.2 million CARES Act grant from the federal government. Hockman said that money can be used to cover COVID-19 response expenses and to bolster long-term financial planning for DART services.

“We appreciate that the administration recognizes that public transit is important to support the economy,” Hockman said.

The pandemic has been a bumpy ride.

Weekday ridership is down more than 60% since the pandemic began, Hockman said.

As people began to stay home, DART cut its services by 20% in April.

Overall routes have been cut in half. “We are balancing decreased ridership with the needs of the workforce,” Hockman said.

DART has cut services in some areas, while shifting more buses to busier ones to help spread passengers out during the pandemic, Hockman said.

That led the board to suspend work on a proposed $68 million operations center at Southeast 25th and Maury streets, close to Martin Luther King Parkway. The site is about a mile southeast of Kemin Industries Inc.’s headquarters.

DART attracted a $17 million grant for the project, which would replace the bus garage and offices just south of downtown along Southwest Ninth Street. The present facility is in a floodway, obsolete and also near a booming housing and commercial area expected to continue growing.

The local cost would be in the neighborhood of $30 million, DART officials said.

Hockman said it’s possible part of the CARES Act money could be used for that project, but that has not been decided.

The fate of the operations center plan, considered a preliminary plan when news broke in November, will be revisited in coming months, she added.

So will a debate even more central to DART’s continued existence: the possibility of a new funding plan. That discussion has revolved around changing the property tax formula that is a backbone for the budget.

The agency has already changed its board structure to give suburbs more of a say on the operation. Board members also have discussed spreading costs through the area with a different property tax system, perhaps considering service levels in each city.

DART also has looked to increase corporate support after a consultant’s report found that the agency would have trouble providing the current services long-term, let alone proposed expansions, without changing its revenue mix.

COVID-19 led to daily health checks of drivers and other staff members, who answer a survey and have their temperature taken.

“They are sent home if they don’t pass, and are tested before they come back,” Hockman said.

On May 12, DART tested 187 employees for COVID-19 in a drive-through system. Nine employees, including seven drivers, tested positive and went home for isolation.

Previously, a driver and three other employees had tested positive between April 22 and May 2.

Buses are regularly and thoroughly disinfected daily. Riders are asked to stay 6 feet apart at the bus station and on the bus.

DART has canceled all public meetings and training sessions.

Bus riders are asked to board at the rear door to stay away from drivers. For the same reason, the bus rides are free during the pandemic so no one has to approach the fare boxes next to the drivers. 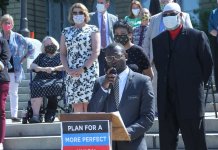