Gov. Kim Reynolds on Monday called for quick action to improve race relations in the aftermath of the death of George Floyd, an unarmed and handcuffed African American who died in Minneapolis after white officer Derek Chauvin knelt on his neck.

“We are here to stand united as Iowans and Americans,” Reynolds said at a news conference on the west steps of the Iowa Statehouse.

“We stand in grief and anger over the unsettling and criminal act of violence that robbed George Floyd of his rights and his life on a street in Minneapolis,” Reynolds said days after Chauvin was charged with murder. “United in solidarity with those who exercise their right to demand swift justice and to take a stand against injustice through peaceful protest.”

Her comments came after three nights of violent protests in Des Moines. They came after decades of tension in Des Moines, where police have tried to forge relationships with neighborhood and community leaders over racial inequities in the city and charges of racial profiling.

Her statements came with the support of several leaders who have been working on the issues for decades.

State Rep. Ako Abdul-Samad, a longtime leader on civil rights, said a man in his 30s approached him early Monday morning near Merle Hay Mall. He wanted to know why the issues continued to simmer — why so many blacks are jailed, why police continue to field complaints of profiling — as they have during Abdul-Samad’s 68 years.

“There is a part of the system that is broken,” Abdul-Samad said. “Not cracked. Broken.”

In response to a reporter’s question, Reynolds said she hopes that a Polk County curfew will end in reasonably short order. But she said police and community leaders are trying to give people a chance to vent their anger, without allowing the vandalism, fights and other violence that have marred demonstrations for several days.

The Polk County Board of Supervisors on Sunday extended the curfews indefinitely, drawing complaints. The Iowa ACLU opposed the action as “far broader than necessary to address problems at protests and could interfere with necessary activities like providing care to others.”

Police generally weren’t arresting people for violating the curfew Monday, but some were arrested for disturbing the peace or failing to disperse. Police arrested a Des Moines Register reporter who identified herself and said she was covering the protests before an officer hit her with pepper spray. The reporter, Andrea Sahouri, who reported live on the arrest as she sat in the back of a police vehicle, was released shortly after.

Asked about the incident Monday afternoon, Reynolds said arresting a reporter “never was the intent.” Des Moines Mayor Frank Cownie apologized and said sometimes people get swept up in the action when tempers flare amid a riot.

When a journalist complained that a photographer was hit by a rubber bullet, Abdul-Samad said he was grazed twice in the face by rubber bullets and hit by a brick thrown by a protester. He said it can be confusing who is there to help and who isn’t.

Police Chief Dana Wingert, who was on the scene at Merle Hay Hall and at the governor’s Monday afternoon news conference, did not address reporters.

Reynolds said “violence is not the answer to this or any other problem. We will protect and defend the safety of our people, our homes, our businesses and our communities.”

Since Saturday, protesters have broken windows out of Court Avenue businesses, the federal courthouse, the Polk County Courthouse and administration building and tried to march close to the Capitol until police turned them away with tear gas.

At the same time, there was a peaceful vigil Sunday at Union Park in Des Moines, and a 1,000-member parade the day before. Reynolds noted peaceful protests in Waterloo, Davenport, Sioux City, Council Bluffs and elsewhere.

“Their message was powerful. Their voices were heard. But the lawless acts of a few hijacked that message and endangered the lives of others,” Reynolds said.

Betty Andrews, president of the Iowa-Nebraska NAACP, said the coronavirus pandemic has made apparent the many inequalities many people of color face.

“We are dealing with a legacy of oppression,” Andrews said, “a proverbial knee that America has on the neck of the African-American community.”

Andrews said the pain and frustration is understandable. It’s a good time to protest, she said.

“We want justice. In that justice, we want the opportunity to peacefully protest,” she added. “It’s important that our voice is heard.”

She added: “We must protest consistently and peacefully. We must press. Also, we must use our voice to vote. We have an opportunity (in the June 2 primary) to have a huge protest. Let’s go to policy, and then we will have power.” 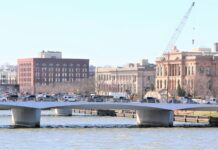 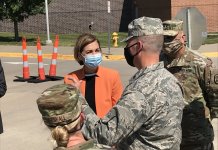