Dr. Michael Hartman, owner of eastern Iowa’s Davenport Hearing Aid Center, has been hit hard by the COVID-19 pandemic, with his business losing $30,000 to $40,000 to date.

The good news, if it can be called that, is that he recently received a pandemic assistance check from the federal government as part of the $100 billion provider-relief package included in the congressionally approved CARES Act.

In order to make use of that money, Hartman had to spend it on personal protective equipment — “I used it to buy a few gloves,” he says — and save his receipts.

“I shouldn’t have even taken the money because the amount of time it’s going to take for me to track this — it’s just not worth it,” he said.

The reason he received so little is that a significant portion of the bailout initially approved by Congress was structured to dole out grants and loans based on past revenue and Medicare billings, not on actual losses caused by the pandemic, and not on financial need.

According to federal officials, the formula for determining the amount of assistance — which was also spelled out in a letter sent to Hartman — entails taking a Medicare-certified health care provider’s 2018 revenue, dividing that dollar figure by 2.5 trillion, and then multiplying that number by 50 billion. In Hartman’s case, the end result was the check for $9.40.

Because of that funding formula, much of the pandemic-related assistance for health care providers has been routed to corporations with large cash reserves, while smaller or cash-poor clinics and hospitals have received relatively little assistance.

Overall, Iowa health care providers have collected more than $605 million in assistance to date through the Provider Relief Fund.

Among the top recipients:

By comparison, Des Moines’ county owned Broadlawns Medical Center, which posted an operating loss of $38 million in 2017 and paid its CEO $713,000, has received only $2.3 million in assistance.

Nationally, the funding disparities have prompted some in Congress to complain that some of the richest hospital chains in America are collecting millions from taxpayers through programs intended to ensure the health care system doesn’t collapse due to the pandemic.

In a recent letter to the U.S. Department of Health and Human Services, Reps. Richard E. Neal of Massachusetts and Frank Pallone Jr. of New Jersey said the agency appeared to be disregarding Congress’s intent in distributing the money.

“The level of funding appears to be completely disconnected from need,” they wrote.

On Tuesday, DHHS announced a new round of financial aid that could provide $15 billion in additional  funding specifically for Medicaid and Children’s Health Insurance Program providers that have not already received payments from the Provider Relief Fund’s general allocation. An additional $10 billion will be directed nationwide to safety-net hospitals like Broadlawns.

Kirk Norris, president and CEO of the Iowa Hospital Association, says that influx of additional money could  total $63 million in Iowa, but there’s likely to be only six to eight Iowa hospitals that qualify for it.

As for the hospitals that have already collected tens of millions from the federal government, Norris noted that much of the funding they have received is either tied to specific COVID-19 expenditures or is in the form of a loan that must be repaid — with some those payments coming due this month.

“And I would say that even our largest hospital system, UnityPoint, is not cash rich,” Norris said.

The money distributed in April and May was intended to not only protect hospitals from collapse, but also to offset some of the losses caused by the fact that lucrative elective surgeries and other nonessential services that add to a hospital’s bottom line have been sharply curtailed due to the pandemic.

For some Iowa hospitals, the financial assistance, even if it’s in the millions, might not be enough. One study, conducted a year before the pandemic hit, concluded there were 17 Iowa hospitals already at high risk of closing due to financial pressures.

Smaller, rural hospitals rely heavily on outpatient services and elective procedures for revenue. Almost 80% of their patient-care services are outpatient-based, and most elective cases — which were temporarily halted as part of the pandemic-mitigation efforts — are outpatient procedures.

A newer study commissioned this spring by the Iowa Hospital Association says Iowa hospitals could lose $1.4 billion in revenue this year. The study showed that in March and April, when elective procedures were suspended, 90% of the state’s hospitals were spending more than they were taking in, with an operating-margin loss of almost 11%.

Marty Guthmiller, chairman of the Iowa Hospital Association board of directors and CEO of the Orange City Area Health System, said last month that while the future is difficult to predict, “we’re relatively certain we will lose a hospital in Iowa because they don’t have capacity to withstand the downturn in revenue.”

Since April, DHHS has disbursed more than $72 billion in grants to health care providers through congressionally approved bailouts that were part of the CARES Act. It’s anticipated that another $100 billion, possibly more, will eventually be distributed.

According to another analysis by Good Jobs First, a public-interest research group, 20 grant recipients that account for more than $5 billion in assistance have more than $108 billion in cash on hand.

A third analysis by the Kaiser Family Foundation produced similar findings, indicating hospitals that cater to wealthier, privately insured patients have collected twice as much financial assistance as those that cater to low-income patients.

By all accounts, the federal government’s formula for distributing funding ensures larger institutions stand to collect more in assistance — at least on a straight, dollar-to-dollar comparison. The federal government did not take into account the corporations’ actual need, their cash reserves or other financial resources available to them.

A DHHS spokesperson, Caitlin B. Oakley, recently told the New York Times that the formula was based on “the data we had on hand at that time” and was intended to get the money disbursed “as quickly as possible.”

The state’s biggest hospitals and their corporate parents received the largest share of the money, with the University of Iowa Hospitals receiving more than $34 million.

Norris says that apart from any disparities in how the money has been distributed, the looming issue for Iowa hospitals is that the total amount isn’t enough to offset the losses they’re expected to sustain this year.

“Even before the pandemic, we had the greatest share of hospitals with negative operating margins that we’d seen in 30 years,” he said. “This is the first time in my career that we’ve said unequivocally, you know, ‘We’re going see hospitals close unless we do something.’ ”

As for Dr. Hartman at the Davenport Hearing Aid Center, he says while he collected only $9.40 in aid, then was shut out of the state of Iowa’s business grant program when it ran out of money, he did qualify for a personal protective equipment loan for $31,500.

He added that he could have taken advantage of an economic income disaster loan for $150,000, but the 30-year term of the loan made no sense given his plans to retire in a few years.

“We’re going to be OK, I think,” he said. “But with all of the people not practicing social distancing around the country right now, if the number of infections picks up here in Iowa we could really get shut down in August.”

Iowa’s top recipients of assistance from the Provider Relief Fund:

The congressionally approved CARES Act, the Paycheck Protection Program, and the Health Care Enhancement Act have provided more than $175 billion for hospitals and other health care providers due to the COVID-19 pandemic.

Collectively, these payouts come from what’s called the Provider Relief Fund, and they include $50 billion in general distributions; $12 billion in targeted allocations for high-impact areas; $10 billion targeted for rural providers; and $4.9 billion for nursing homes.

According to DHHS, here are the top Iowa recipients of payments from the Provider Relief Fund as of June 4: 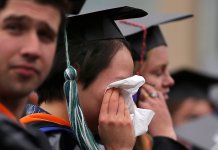