A farmers union member asked if fossil fuel companies should be eligible for COVID relief funds.

“I’d rather they weren’t,” said Ernst, who is facing an election challenge from businesswoman Theresa Greenfield. The Democrat has accused Ernst of being cozy with oil companies who donated to her campaign.

“You know, we can see additional support for our ethanol producers. I think that’s really important,” Ernst said.

Another questioner attending the Zoom session asked Ernst if she would co-sponsor legislation introduced by Democratic Sens. Cory Booker of New Jersey and Jon Tester of Montana to address acquisitions and mergers in the food and agriculture industries.

Ernst, who grew up on a farm near Red Oak, Iowa, and still lives in the area, appeared unfamiliar with the bill and said she would have her staff research it. She added, though, that the U.S. Department of Agriculture, under pressure from Ernst and her Senate colleague, Chuck Grassley, is investigating meat companies and allegations of price-fixing. That investigation should be done in a month or two, according to Agriculture Secretary Sonny Perdue, said Ernst. She vowed to seek “stakeholder comments” about the report later.

Ernst said she has proposed a requirement that the meat plants buy at least half their cattle on the cash market to help local farmers.

“Certainly, when it comes down to it, when you’ve got four main corporations basically that are controlling everything, things don’t go our way,” Ernst said.

Another questioner asked if Ernst would support allowing undocumented immigrants to gain citizenship, given their importance to meat processing and other agricultural operations.

“I support legal immigration,” Ernst said. However, she said she has supported a pathway to citizenship for those who arrived in the United States as children.

Ernst said she might also consider extending visas for some workers who are not U.S. citizens. “I know that we need a good solid workforce and those that are willing to contribute to their communities and provide for their families,” Ernst said. “So, it’s certainly worth having the discussion” of providing some sort of temporary legal standing for workers, short of citizenship, she added.

With the U.S. Environmental Protection Agency this week expected to release its latest requirement for ethanol blending, Ernst said, “We certainly need to make sure that they are sticking to the 15 billion gallons of ethanol commitment that was made to me in the White House Oval Office. I have spent hours and hours and hours on the phone educating (President Donald Trump) on the Renewable Fuel Standard and everything’s that’s involved in that and making sure that not only has he made that commitment, but that he continues to keep that commitment.”

An hour before Ernst met with the farmers union, Greenfield held a news conference, also via Zoom. She repeated many criticisms she raised Monday, painting Ernst as an ally of oil companies whose PACs helped finance Ernst’s campaign. Greenfield said Tuesday she will not accept corporate PAC money.

Greenfield said she understands farmers’ plight because she grew up on a farm and lived through the 1980s farm crisis.

“This is really personal to me,” Greenfield said. She noted that net farm income is down 75% since 2013. 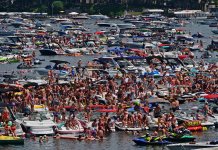