Leaders of Iowa’s largest companies still are bearish on Iowa’s recession-rattled economy, but more optimistic than they were in the first quarter.

The Iowa Business Council’s quarterly survey found the economic outlook index rising to 41.25, up from 37.5.

“That gives us little glimmers of hope and optimism as we move forward,” said Joe Murphy, council executive director.

Because the index again fell under 50, that means the executives overall have a negative sentiment towards the next six months, Murphy said.

The first quarter reading was the lowest since the Great Recession in 2009.

Murphy said he considers it a good sign that business owners were more positive after one quarter of a sagging index. “When you look at the last recession, IBC had two straight quarters of decrease, so I have cautious optimism,” he said.

“I don’t want to be overly optimistic,” Murphy added. “There are hardships that we as a state have to overcome, but Iowans are up to the task. We always recover.”

The survey measures members’ expectations for sales, capital spending and employment. The business leaders said disruptions due to the COVID-19 pandemic along with regulatory changes were among primary challenges.

Overall, 60% of survey respondents expect sales to be lower over the next six months. Forty-five percent predict employment will fall, and just 35% expect higher capital spending over the next two quarters.

Half of those surveyed had laid off or furloughed workers due to the COVID-19 pandemic. Of those employers, 80% expect to rehire most or all of those workers, and 60% expect that to happen in the next seven to nine months.

A majority of IBC members said they are only hiring critical staff, while 10% have expanded their workforce.

Murphy said the governor’s Economic Recovery Advisory Board will be looking for ways to expand Iowa’s economy beyond what it was before the pandemic hit.

“This is a good opportunity for us to reset and try to find the positives in a very challenging situation,” Murphy said. “The goal is not only to get back to the economic conditions of March 1, but to get back to that point and beyond. We fully expect to come out of this stronger than before.” 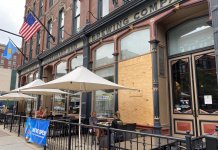