From 2016 to 2018, the GOP senator from Iowa noted, there was a spread of $21 per 100 pounds of meat between what the packing companies were paid and what farmers received for cattle. The difference rose to $279 in April and May when supplies were disrupted because many plant workers contracted COVID-19.

That was a 1,228% jump, and the largest spread between what the farmers are paid and what the packers make since mandatory price reporting began in 2001, Grassley said. Prices for some beef products doubled and tripled.

“All of this has made clear that the cattle market is broken and real action is needed to fix it,” Grassley said.

“Because there are only four companies that slaughter 80% of cattle, companies have the advantage of purchasing cattle from thousands of producers, acting as a choke point for the entire industry,” Grassley said on the floor of the Senate. “These packers dominate the marketplace and limit opportunity for pricing negotiations.”

Grassley has pushed for legislation that would require packers to buy half their cattle on the cash market to protect against excessive influence from the major companies.

“Any solution must not restrict an individual producer’s freedom to pursue marketing avenues that they determine best suit their business’ unique needs,” the trade group said in a statement.

“Government mandates, like that being proposed by Sen. Grassley, would arbitrarily force many cattle producers to change the way they do business,” the group wrote. “We will continue to work toward a more equitable solution and invite Sen. Grassley, and other lawmakers interested in this conversation, to join us in the search for an industry-led solution based in free-market principles.”

Iowa beach advisories down for algae toxins, up for bacteria 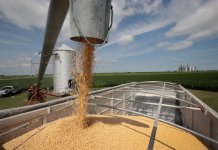 At UI Hospital, more patients are leaving the ER without being...