Vice President Mike Pence, campaigning in Iowa on Thursday, promised assistance to Iowans devastated by this week’s derecho storm, although he offered no specifics.

Pence had no tour of storm damage in his schedule but he delayed a speech at the Iowa State Fairgrounds to meet with farmers affected by the natural disaster.

“I must tell you when I heard about this storm, as a lifelong Hoosier, I was taken aback to hear the magnitude of this storm and its impact,” Pence, the former governor of Indiana, said. “I just met with families who literally had seen virtually their entire crop wiped out. They were standing strong, standing together.”

He said, on behalf of the president, “I want Iowans to know that we are with you, we are going to stay with you and we will work with your governor and your senators to make sure that we bring Iowa all the way back, bigger and stronger than ever before. I promise.”

I was briefed today by @IAGovernor, @joniernst, @MikeNaigIA, and local farmers on Monday’s destructive derecho here in Iowa. Like I said to the farmers: President @realDonaldTrump and I are with you and we’ll make sure you have what you need to recover from this storm. pic.twitter.com/WJp4cmTAt4

Gov. Kim Reynolds, speaking before Pence at a Trump-Pence campaign event at the Iowa State Fairgrounds, called the damage “devastating and widespread.” Early estimates show at least 10 million crop acres — about 40% of Iowa’s cropland — have been affected, not including storage bins and other structures destroyed or damaged.

Hundreds of thousands of Iowans were without power, down from 550,000 households at the peak of the outages.

Reynolds said she spoke to President Trump on Tuesday and Reynolds’ office said she also spoke to Pence on Wednesday and was assured the “full resources” of the federal government would be available.

“It’s another huge blow to Iowa’s farmers,” she said.

Thursday was originally scheduled to be the first day of the Iowa State Fair, which was canceled because of the coronavirus pandemic. Pence remarked the fairgrounds are “usually busier” in the summertime.

After acknowledging the storm damage and making some brief remarks about the pandemic, Pence turned his attention to the campaign for re-election. He portrayed the presumptive Democratic presidential nominee, former Vice President Joe Biden, and running mate Sen. Kamala Harris as backing a radical social and environmental agenda that would harm farmers.

“Senator Kamala Harris said she would change the dietary guidelines of this country to reduce the amount of red meat Americans could eat,” Pence said, to boos from the audience. “Well I’ve got some red meat for you. We’re not going to let Joe Biden and Kamala Harris cut America’s meat.”

Pence accused the Biden campaign of wanting to “abolish fossil fuels.” He touted Trump administration ag-friendly policies such as the 2018 tax cuts and the rollback of environmental regulations including the Waters of the U.S. rule.

On ethanol, he touted the administration’s agreement to allow year-around sales of 15% ethanol blends, which in the past could not be sold in the summertime.  “President Trump told the people of Iowa this administration would work to expand ethanol markets and that’s just what we’ve done,” Pence said. “… Promises made, promises kept.”

He didn’t mention the administration’s controversial move to grant waivers to petroleum producers allowing them to blend less ethanol than required under the Renewable Fuel Standard. The waivers have been a sore spot with the ethanol industry as well as Iowa’s Republicans senators.

About a quarter of Iowa’s ethanol plants were shut down at least part of the past three months because of reduced demand during the pandemic.

Democrats, in advance of Pence’s remarks, criticized the Trump-Pence administration’s record on agriculture and its response to the COVID-19 pandemic.

Indianola farmer Kevin Middleswart said his family had personally felt the impact of the Trump administration’s renewable fuel policies. He said he was delivering grain to a local co-op on a day when one of the area ethanol plants closed unexpectedly.

“And we saw a 30-cent decline in the overnight bid that the co-op was able to pay the farmer — now that’s a 9% drop in a 24 hour period,” he said. “You only have to look at my bank account and my tax return to see that, you know, I didn’t think 2020 could get any worse. But I expect that it will.”

“Well, when it comes to Big Oil and farmers, it’s pretty clear this administration sides with Big Oil,” Vilsack said. “I say that because of the waivers that have been granted that have decimated the capacity of our ethanol industry to continue to prosper.”

Democrats also criticized Pence for appearing in Iowa at an event sponsored by the Heritage Foundation, which they portrayed as being pro-Big Oil and an opponent of the Renewable Fuel Standard.

Pence was also scheduled to appear at a Republican Party of Iowa dinner before returning to Washington. 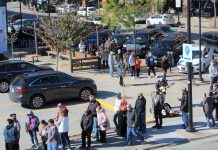 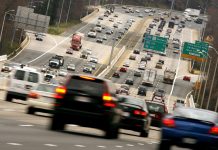 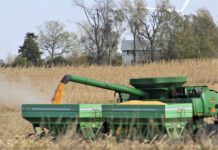