The Iowa State Education Association and the Iowa City Community School District filed a lawsuit against the State of Iowa on Wednesday over the state’s attempt to dictate when a school district can move to 100% online classes.

ISEA, a teachers’ union that represents educators throughout the state, and the Iowa City schools allege in their lawsuit that Gov. Kim Reynolds overstepped her authority by requiring school districts to primarily hold in-person classes. They also allege that the decision-making powers of school districts and school boards supersede Reynolds’ proclamations, giving them the authority to choose how to return to school this fall.

The lawsuit also alleges Reynolds, in her role as governor, is violating the Iowa Constitution by failing to protect the “health and welfare” of Iowa’s residents and not allowing schools to choose primarily virtual learning.

“We believe those closest to the communities should be the ones making those decisions,” said ISEA President Mike Beranek, during a press conference Wednesday.

Then, a little over two weeks later, Reynolds issued a proclamation requiring schools to provide 50% of their  instruction in person, leaving some school districts scrambling to reconfigure their plans.

On July 30, Reynolds announced the thresholds that school districts must meet before they can request approval from the Department of Education to move to virtual classes, including a 15% infection rate in their counties and 10% student absenteeism.

“We’re looking at the whole child and taking a look at everything when we’re talking about getting these children the education that they deserve,” Reynolds said during her July 30 press conference.

Reynolds has continually defended her decision by citing Senate File 2310, a non-controversial bill that passed the Legislature that is meant to help guide schools through the pandemic. One part of the bill states schools must “primarily” offer classes in-person, which Reynolds has interpreted as 50%.

The lawsuit contends that Reynolds has “exceeded her authority,” stating she does not have the power to stop online learning when conditions are “unsafe,” and that Iowa law allows school boards to make health and safety decisions, similar to when there’s inclement weather.

After a state official admitted the Iowa’s COVID-19 website was underreporting infection rates, Beranek said the need for local control is even more apparent, particularly since school districts rely on the state’s data to determine whether or not they can apply for a waiver allowing them to temporarily close.

Beranek said some school districts have chosen to rely on the data provided by their county health officials, instead of the data produced by the state.

“Because of the missteps by IDPH and reporting rates within counties, people are unsure of what those numbers even mean,” Beranek said.

Brady Shutt, a teacher at Iowa City and president of the Iowa City Education Association, said the school board voted to delay the start of the school year until September after its waiver to temporarily move classes online was rejected.

The school board also approved a plan that relies on local COVID-19 data, rather than the state’s numbers.

“I have such great and profound faith in our teachers and my colleagues to deliver a world class education to students in the state of Iowa regardless of the model,” Shutt said.

As part of the lawsuit, the teachers union and Iowa City schools are seeking a temporary injunction that would pause, at least for now, the governor’s proclamation. 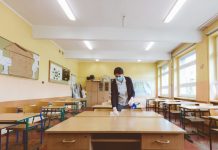 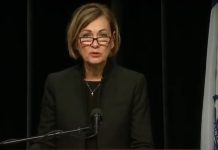