Mnuchin: White House would back additional cash to states in relief deal

WASHINGTON — Treasury Secretary Steven Mnuchin on Tuesday said the Trump administration would be open to providing additional aid to state and local governments — a key sticking point in stalled negotiations over another round of federal coronavirus relief.

Mnuchin also urged lawmakers to move forward with a package that would address specific areas of agreement, such as enhanced loans to small businesses, money for schools to reopen safely, and direct payments to individuals.

He spoke during a hearing of a coronavirus oversight panel in the U.S. House and agreed to reach out to House Speaker Nancy Pelosi, D-Calif., to resume negotiations once the hearing was over.

However, Mnuchin did not cite a specific figure for assistance to states and repeated the administration position that Democrats’ proposed nearly $1 trillion in such aid was too high, along with other demands.

Iowa has received $1.25 billion in state aid through the CARES Act for pandemic related expenses. That is just one of the sources of federal coronavirus relief dollars that have come into the state. Iowa ranks fifth in the nation for the percentage of allocated CARES Act dollars it has spent, according to a States Newsroom analysis of U.S. Treasury Department data (see below).

In his opening remarks, Mnuchin also backed “substantial” funds for testing and vaccines and continuing enhanced unemployment benefits — another major point of disagreement between the parties. And he called for liability protection for universities, schools and businesses, a GOP priority that Democrats have so far rejected.

Lawmakers have enacted four coronavirus packages since March and have been debating the contours of a fifth for months. Mnuchin was deeply involved in those negotiations.

Pelosi said on Monday that “Republicans refuse to act” and that they “do not understand the gravity of the situation or care about the needs of America’s working families.”

House Democrats laid out their opening bid in a bill they passed in May that would provide some $3 trillion in additional relief. It includes nearly $1 trillion in aid for state, local, territorial and tribal governments so they can keep firefighters, police officers, health workers, teachers and other public service professionals on the payrolls despite budget shortfalls.

Senate Republicans offered a more targeted $1 trillion overall proposal earlier this summer. They agreed to $150 billion in aid to states and cities and more flexibility to spend the $150 billion for cities and states that was approved in an earlier coronavirus package.

Democrats offered to drop the price tag of their entire package by $1 trillion if Republicans upped theirs by $1 trillion. But Republicans rejected the offer, and Mnuchin said Tuesday that Democratic leaders would not continue to negotiate until all parties agreed to a topline figure.

Talks broke down as lawmakers left for their August recess. Soon after, President Donald Trump signed three presidential memoranda and an executive order targeting assistance for people without jobs, facing eviction or beset by student loan payments. Democrats called the actions a “bandaid” on an economic crisis and questioned their legality.

On Tuesday, Mnuchin urged lawmakers to push for a larger deal — but conceded that Republicans and Democrats are far still apart on key issues.

He called $1 trillion in aid to states and cities “way too high” and cited ongoing feuds over how much money to set aside for other priority items. He called for a piecemeal approach if the parties can’t reach a deal on a larger package.

“Let’s start spending money where we can agree to help the American people,” he said.

In what appeared like a resumption of negotiations during the hearing, House Majority Whip Rep. James Clyburn, D-S.C., chair of the panel that held the hearing, signaled an openness to finding “some common ground” and said Democrats are willing to come down if the administration is willing to come up and include aid to states and local governments.

But a deal appears still far from reach.

Ohio Rep. Jim Jordan, a Republican, railed against bailing out Democratic-led state and local governments. His comments echoed those of Senate Majority Leader Mitch McConnell, R-Ky., who earlier this year characterized aid to cities and states as a “blue-state bailout” and said he would be open to allowing states to file for bankruptcy.

McConnell’s comments sparked an uproar among Democratic and Republican leaders alike, who noted that state and local governments led by both parties are facing budget shortfalls.

Jordan also objected to helping states run by Democratic governors who have ordered shutdowns to prevent infection outbreaks, though GOP-led states mandated closures as well, and said much of the money approved in an earlier coronavirus package has not yet been spent.

Instead, Jordan called for helping small businesses and giving states more flexibility to use the $150 billion that was already approved for states in the CARES Act. Forget about the “left-wing baloney,” he said. “We should be focused on one thing and one thing only: Letting people go back to work.”

Clyburn brushed off Jordan’s broadsides. “This is not just Democratic governors not reopening schools and businesses,” he said. “This is every governor taking into account the health situation in their particular states.”

Rep. Jamie Raskin, a Maryland Democrat, said he was pleased to hear that the administration is open to aid to cities and states and praised Mnuchin for striking a different tone on the issue.

He also dismissed claims that cities and states haven’t spent funds appropriated earlier this year as a “talking point” Republicans use to oppose additional aid.

He said a report released last week by the Treasury Department doesn’t fully account for all cities and states’ allocations and obligations or for spending in July and August.

Mnuchin heralded the “strengthening economic recovery,” citing growth in jobs, retail sales, business activity and home sales, while Clyburn emphasized that millions of Americans are facing eviction, debt and hunger as the pandemic rages on. But Mnuchin conceded that “there is more work to be done, and certain areas of the economy require additional relief.” 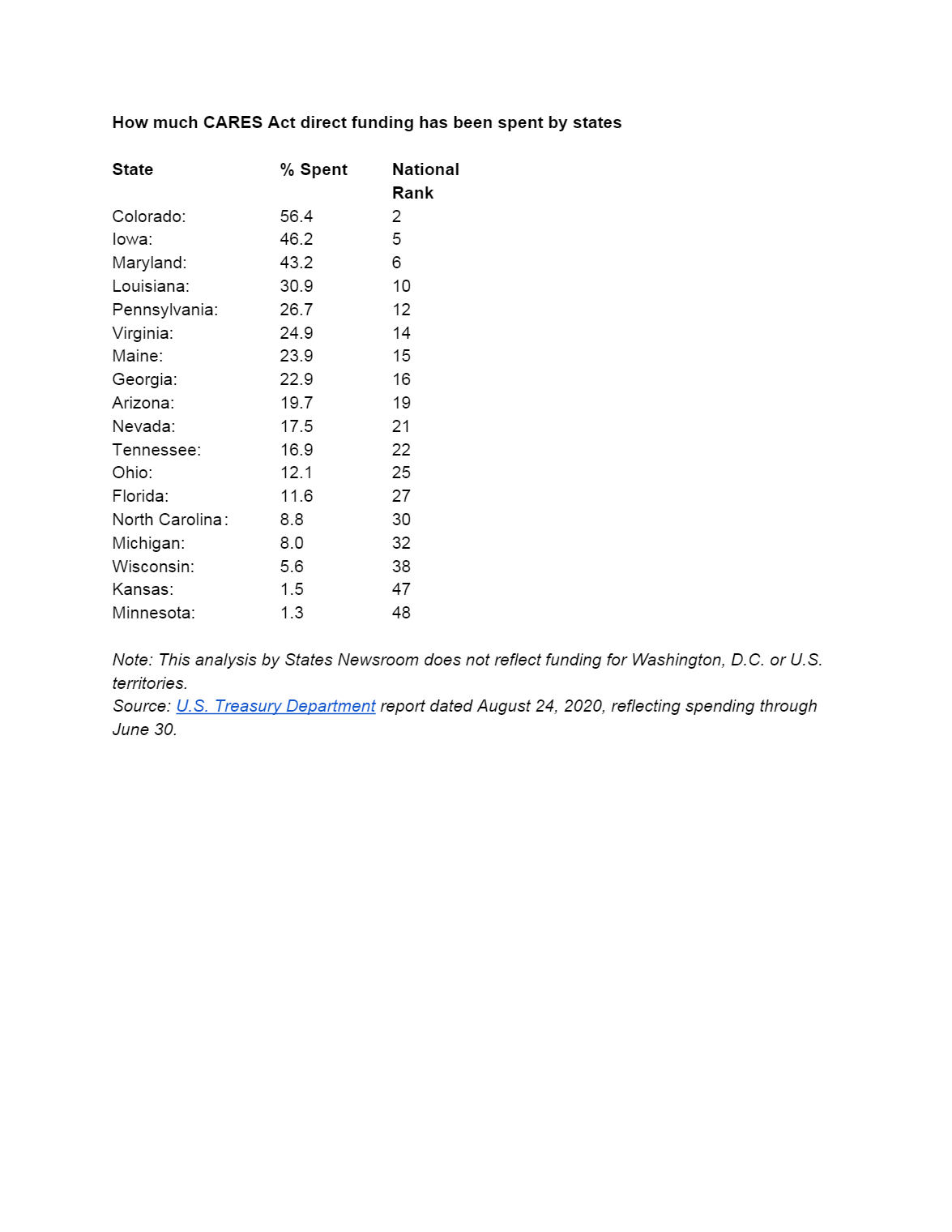 Mnuchin: White House would back additional cash to states in relief deal

Allison Stevens is a correspondent for the States Newsroom Washington, D.C., bureau.