This country’s struggle to deal with the coronavirus pandemic, climate change and racial justice shows the need for a multi-trillion-dollar “green recovery,” speakers told the Society of Environmental Journalists Wednesday.

“If you talk about how systemic racism is built into America’s DNA, then you see how no matter if you talk about housing, health care, transportation, energy, land use planning or education, you can see that the disparities that are created by the built-in system that generates inequality have always been known and have always been recognized, but have never been dealt with,” said Robert Bullard, an environmental sociologist at Texas Southern University.

Democratic Congresswoman Donna Shalala of Florida, who was President Bill Clinton’s Health and Human Services secretary and later president of the University of Miami, said Congress will not pass the massive infrastructure bill President Donald Trump mentioned before and after his election unless it supports projects that reduce carbon emissions tied to climate change.

“Let me assure you, the next Congress will be very green,” Shalala told members of SEJ, a nonprofit professional journalism organization. But the work to promote alternative energy and other green technologies will cost several trillion dollars, she added.

Asked by a reporter what the United States would look like if the coming election doesn’t result in a “green recovery,” Shalala said: “Black.”

Michael Greenstone, an economics professor at the University of Chicago and a former adviser to President Barack Obama, said the pandemic has been “kind of breathtaking” in its ability to show how interconnected the world’s nations are. And despite Trump’s “America first” approach and backtracking from some international efforts, the pandemic has shown how important the alliances around the globe are, Greenstone added.

Shalala told the online SEJ audience that the hospital industry has shown the country’s weakness in responding to pandemics.

“We clearly have put the economic incentives into efficiency, which supports much less resources, particularly the nimbleness that you need to respond to a pandemic. “We don’t have the kind of slack that we need. We just don’t fund redundancy.”

Shalala said the pandemic has shown the importance of Obamacare. “We’ve always had big gaps because we don’t have universal health care,” Shalala said. “We fill some of it with Obamacare, the Affordable Care Act, but not all of it.

“It’s been very striking who’s been left out, and the number of minorities and low-income people that have disproportionately been hit by the pandemic,” Shalala added.

Greenstone said the simplest solution to the climate change issue would be a carbon tax that would force emitters to pay based on how much they pollute. President Bill Clinton pushed that idea in his term, with Vice President Al Gore leading the way, but the idea stalled.

“The problem is when we do all kinds of things that are good for the economy and good for us, that involve the use of fossil fuels, this terrible (carbon dioxide) gets emitted into the atmosphere,” Greenstone said. Unless governments push the idea of a tax, motorists won’t think about climate change when they are fueling their vehicles, and companies won’t consider the worldwide ramifications of their emissions as much, Greenstone added.

But after watching the United States’ response to novel coronavirus pandemic — “the misinformation, the failure to respond to science, localization, and the failure to mobilize correctly” — he is less optimistic about addressing climate change.

“I think I’ve revised down my view on our ability to respond to climate change,” Greenstone said. “I think I was probably overestimating the efficacy of some of our institutions.” He referred in general to the U.S. government.

Shalala agreed. “There’s no question that our infrastructure that we thought we had has collapsed on us, certainly for public health responses,” she said. “We’re going to have to rebuild that, and the systems we run with that. I think it’s been a lot of disinvestment. It’s not a lack of faith in American institutions.”

Shalala recalled warning Congress years ago about the need for better public health in the country, “and eyes glazed over.” Now, the failings of the system are drawing attention, she added.

The panel was part of SEJ’s 30th annual conference. 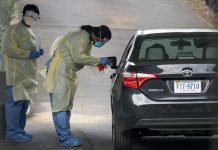