The candidates for the 2nd Congressional District seat in southeastern Iowa on Thursday split on the idea of a federal mask mandate, but agreed more federal stimulus aid is needed to address the pandemic.

Democrat Rita Hart and Republican Mariannette Miller-Meeks, locked in a battle to replace retiring Democratic Congressman Dave Loebsack, answered questions from a panel of reporters for an hour on Iowa PBS. The candidates appeared in an empty auditorium in Johnston with plastic barriers separating them and the “Iowa Press” team.

Hart said she would support a federal requirement that Americans wear masks or other face coverings to protect against the spread of COVID-19, the respiratory illness caused by the coronavirus.

Hart said if Congress reacted like Iowa neighbors did to help each other after a devastating derecho storm Aug. 10, members would pass a bipartisan mask mandate.

“I think it’s only reasonable again to listen to the scientists who say that masks do make a difference,” Hart said. “I think we’ve lost an opportunity here. (After the derecho) everybody rallied around, and we didn’t ask who was a Republican and who was a Democrat. Everybody pitched in and helped. We had an opportunity to do that in (the pandemic) and we lost that opportunity. We have to keep each other safe and we have to follow the guidelines to do that.”

Miller-Meeks said a mask mandate is unnecessary. “I don’t think we have to have a mandate from the federal government, but I certainly think that our communication with individuals that wearing the mask can help protect other people and can also protect you,” Miller-Meeks said.

“Every place is not New York; they don’t all have mass transit. They don’t all live in high rises,” she added.

President Donald Trump on Thursday signed an executive order to affirm the U.S. government will protect patients with pre-existing conditions, a centerpiece of the Obama-era Affordable Care Act he has worked to dismantle.

“I don’t think it solves the problem, but it certainly helps set the framework and some groundwork for us,” said Miller-Meeks, an ophthalmologist and state senator from Ottumwa.

While many thought ACA would address many health-care problems, premiums continue to rise, Miller-Meeks said. “Portability and accessibility are still problems,” she added.

Hart said the first order of business is to stop weakening coverage. “I think it’s really important that we take what we have now and improve upon it. The thing that we cannot do is to go backwards, and that’s why it’s very, very troubling to see the Republicans continue to go down this pathway of trying to take away the Affordable Care Act and the provisions that people have found so important to their families,” Hart said.

“That would include (coverage for) pre-existing conditions and the ability to keep your child your plan until they are 26,” said Hart, a former state senator, former teacher and 2018  candidate for lieutenant governor.

Both candidates hope Congress will shake off a partisan battle to approve another stimulus bill to help businesses, workers and local governments through the financial upheaval of the pandemic.

Hart said she was glad to see bipartisan support of the first stimulus package, which makes the current deadlock in Congress troubling. “It’s disappointing now that they are struggling to get it the second relief package done because people are still suffering, and we don’t have this virus under control and so the pain is going to continue,” Hart said.

“We do know that the hospitality industry, and the retail industry got hit very hard and will continue to get hit hard,” Hart said. “The people who have lost their jobs through no fault of their own still need to be to get that unemployment. And we might want to make sure that people can pay their rents, and landlords can only last so long. We don’t want to add to the homelessness problem,” she added.

“I think that we found that the pandemic is lasting a lot longer than we thought it would,” Miller-Meeks said. “This virus has proven to be very tricky and very resilient.”

“The second relief package is also necessary,” Miller-Meeks said. “I think it does need to continue to cover unemployment for those people who have not been able to go back to work or whose jobs have ended,” and the $600 in added unemployment benefits should be debated, she added.

In recent weeks, the candidates have focused their campaigns on meeting with constituents via Zoom and in socially distanced appearances.

In the weeks leading up to the debate, Miller-Meeks floated the idea of a fuel tax increase to help pay for infrastructure. Hart pushed to end Trump era rollbacks of environmental regulations, and opposed waivers of ethanol blending requirements. 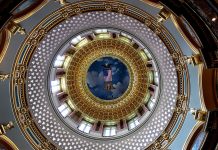