Iowa recorded another 12 deaths from COVID-19 on Monday as new cases, hospitalizations and deaths continued to rise, according to data from the New York Times.

Iowa has recorded 1,400 deaths since the pandemic began and the seven-day average is up 47% from the previous two weeks.

A longtime special education teacher in Des Moines died after contracting the virus on an out-of-state trip, the Associated Press reported Tuesday. The teacher, who was not identified, had not been in the classroom since March, according to the school district.

There were 517 new cases reported Monday and the state averaged 858 cases a day for the past week, a 1% increase from the average two weeks earlier, the Times reported.

Iowa on Monday was eighth in the country for the number of new cases within the past seven days per 100,000 population, according to the Times data. Since the pandemic began, Iowa has recorded 93,448 positive cases.

The Iowa Department of Public Health, as is common, reported far fewer positive cases than the Times, with 328 new positive tests and two deaths recorded as of Monday.

Hospitalizations of people with COVID-19 continued to rise, with 413 people in hospitals compared to 389 the previous day, according to the Iowa Department of Public Health’s data. The state reported 61 people admitted within the past 24 hours. The two-week total of 795 recorded Monday was another new record, topping Sunday’s total of 775. 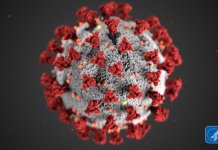