The 3rd Congressional District debate sponsored by KCCI-TV and the Des Moines Register was at times like watching a high-speed political ping pong match.

Should President Donald Trump hold his scheduled rally Wednesday in Des Moines less than two weeks after his COVID-19 diagnosis?

Young: Sure, with the usual masks and social distancing.

Axne: “Absolutely not, and I think it shows his carelessness …”

Young accused Axne of telling people who voluntarily choose to go to Trump’s appearance they shouldn’t be able to make up their own mind. “I’m for freedom,” Young said.

Both candidates objected to the recent history of immigrant families being separated at the border. Both also supported the idea of an improved path to citizenship for immigrants.

“No parent should ever have to face that, and no child should never be left alone without their parents,” Axne said. “It’s a stain on our nation’s history,” she said of the Trump administration’s practice of separating families.

Axne said she wants to see a more home-like environment where the families could stay together, but still provide education for the children.

Said Young: “I did vote to make sure families weren’t going to be separated at the border,” Young said, noting the border must be secure.

The moderators asked the candidates where Iowa could find new markets for grain.

Young suggested the Pacific Rim nations that would have been part of the Trans Pacific Partnership that President Trump rejected early in his term. “We have real opportunity there,” and should pursue individual trade agreements with the nations, Young said.

Toward the end of the debate, the discussion veered off the usual debate fare.

One of the two moderators, KCCI’s Steve Karlin, asked the candidates if either one could recite the current price for hogs. Neither could, but Young rattled off the price for corn and soybeans and added, “I like bacon.”

At the end of the debate, the moderators, Karlin and Des Moines Register reporter Stephen Gruber-Miller, asked a series of lightning round questions that gave the candidates a chance to be more personal.

Should marijuana be legalized for all uses?

Young: For medical purposes but not recreation.

What’s on your playlist?

Young: The Who’s “Won’t Get Fooled Again,” and “Kashmir” by Led Zeppelin.

Young: Moved his hand in a motion of indifference.

Snack on the road?

In a rare fit of agreement, both said fall.

Over the weeks leading up to the debate, Young and Axne sparred on health care, the COVID-19 pandemic, climate change, and allegiance to party leadership.

The election is Nov. 3, but many Iowans already are voting. 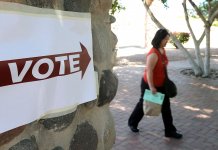