The so-called “values voters” in Iowa’s 1st Congressional District have a clear choice this November.

When it comes to education, police reform and immigration, Democrat Abby Finkenauer, seeking a second term in the November election, and Republican challenger Ashley Hinson from Marion are rarely in agreement.

Here’s a look at each candidate’s stand on the three issues:

Hinson says Iowa is facing a workforce crisis and points to studies that show employers in the state were struggling with staffing shortages before the pandemic because they couldn’t find the skilled workers they need to expand their business.

How the Chamber of Commerce learned to love House Democrats

Hinson says that’s a sign that Americans are going to need post-secondary credentials to succeed in a competitive, technology-driven economy.

She cites her support for Gov. Kim Reynolds’ Future Ready Iowa initiative, which invests in workforce training to close the job-skills gap.

Hinson says she plans to continue that effort at the federal level by supporting funding for vocational schools and training programs that will expand access to education and the career options of future generations.

Last December, Finkenauer introduced a bill to address teacher shortages in rural schools. The Rural Education Investment Act requires the federal government to determine the percentage of K-12 students living in rural areas and ensure it is equal to the percentage of Teacher Quality Partnership grants routed to schools in the area.

The grant program allows teachers to be placed in full-time classroom settings while completing their master’s-level coursework.

Finkenauer has said the bill will help offset the impact of “attacks on our public school teachers in the Iowa state legislature” — a reference to the rollback of collective-bargaining rights that Hinson supported.

Last fall, Finkenauer introduced the RETAIN Teachers Act, which is intended to expand the teaching profession and streamline paperwork requirements for programs that help teachers finance their education and repay student loans.

“Our hardworking teachers are already buried under piles of paper,” Finkenauer said at the time. “Government should not add to the pile — it should be easing the burden.”

When it comes to comes to “defunding” the police — a term that typically refers to defunding military-style operations by local police, not the elimination of police departments — Finkenauer said she does not support defunding police departments and wants to see more money dedicated to police training.

She said she supports the George Floyd Justice in Policing Act, which seeks to hold police accountable for their actions, facilitate training and encourage the development of uniform policies on the use of force.

Finkenauer said she recalls meeting with Waterloo’s chief of police and asking him whether there was a need to ban the use of choke holds by the police.

“I’ll never forget his answer to me and it was that this 2020 and there should be no reason for choke holds to be part of any use-of-force policy at any police station across the country,” she said.

Hinson has questioned Finkenauer’s commitment to refrain from defunding the police and says she is “100 percent in favor of law enforcement and 100 percent against police brutality.” She says that if elected she will go to Washington and “stand up for our law enforcement.”

Hinson has criticized Finkenauer for voting in 2018 against a Republican-sponsored bill in the Iowa Legislature to ban sanctuary cities.

At a recent debate, Finkenauer said she “listened to our sheriffs and our police officers” who said the legislation was going to cause “so much fear in their communities” that it would discourage people from reporting crimes and result in even greater public safety issues.

“Our system has been overwhelmed by illegal immigrants coming across our southern border,” she says. “Now we have a humanitarian crisis, rampant human trafficking and drugs like fentanyl pouring across our border and fueling the opioid crisis.”

She says she’s in favor of strengthening the border, increasing funding for border security, and fixing the system of legal immigration “so places like Iowa can have their workforce needs met.”

Finkenauer says it’s “abundantly clear that our current immigration system is broken and is failing our country, our state, and the people of eastern Iowa.”

She says she supports a renewal of DACA, the Deferred Action for Childhood Arrivals program that defers deportation of people brought to the country as the children of non-citizens. She also says immigration reform should include measures to strengthen our borders to block the migration of drug traffickers and gang members, and says the E-Verify system of approving the hiring of immigrants must be strengthened and made mandatory for employers.

“We should change policies around family separation so officers can focus instead on effective border security, interior enforcement, and protecting our communities,” Finkenauer says. 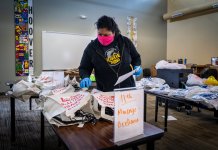