The deadly coronavirus is continuing to spread throughout Iowa at an unprecedented rate, with 1,879 new infections and 25 deaths reported Tuesday.

On a per-capita basis, only five states now have a worse record of coronavirus infections, according to a new report from the White House Coronavirus Task Force.

The number of new infections in Iowa represents a significant decrease from last Saturday’s record-breaking one-day tally of 2,826. However, it is still three times the average number of new cases reported each day in mid-August.

Over the past week, there has been an average of 2,246 cases per day. That’s a record-breaking increase of 105% from the average two weeks earlier, according to the New York Times.

The biggest spike, however, is tied to an indicator closely watched by public health officials: new hospital admissions for COVID-19 made during the previous 24 hours.

On Wednesday, the Iowa Department of Public Health reported that a record 164 Iowans had been newly admitted to hospitals for treatment of COVID-19 — a 78% increase from the previous day’s total of 92.

The Institute for Health Metrics and Evaluation at the University of Washington predicts Iowa will run out of intensive care beds by Dec. 5.

During the almost eight-month duration of the pandemic, Iowa topped Tuesday’s death toll of 25 on only three previous occasions. The state is now averaging 14 deaths per day, double the rate seen in mid-September.

More than three-fourths of the 50 states, including Iowa, are now in the so-called “red zone” for coronavirus cases, according to the latest report from the White House Coronavirus Task Force. Iowa now ranks No. 6 on the list of states with the highest per- capita number of infections, and only four states have a higher rate of test positivity.

The White House task force has repeatedly recommended that Iowa require people to wear masks in public. Gov. Kim Reynolds, who has allowed bars and other business to reopen with some restrictions, has declined to require masks, saying she trusts Iowans to act responsibly and that a mandate would be unenforceable.

As of Wednesday morning, Iowa had reported 134,576 cases and 1,780 deaths since the beginning of the pandemic, according to the Times’ database. 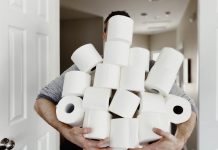 More records set for COVID-19 spread in Iowa, with new hospital admissions up 78%