State Sen. Mariannette Miller-Meeks on Tuesday took a 49-vote lead in her race against Democrat Rita Hart, whose campaign called a mistake in Lucas County “outrageous” and called for careful certifications of the vote across the district.

For the second time in a week, Secretary of State Paul Pate called a news conference to go over mistakes made by a county election crew, this time in Lucas County. Pate ordered an audit of the Russell precinct’s results, which had been excluded from reported totals. The votes were included the new totals on Pate’s site showing Miller-Meeks in the lead.

Lucas County will recount all votes in the county beginning Thursday, at Pate’s request.

“These human errors are unfortunate and frustrating, but the system is working,” said Pate, who had asked all 99 auditors to double-check results.

Lucas County Auditor Julie Masters said at a news conference with Pate in Chariton Tuesday morning that she takes responsibility for the error. Test data had been included in the initial reporting instead of election night results in that one precinct.

Last week, it was a mistake in Jasper County that briefly allowed Hart to take a 162-vote lead after trailing unofficially on election night and early the next day by 282 votes.

On Tuesday morning, Miller-Meeks, a Republican making her fourth run for a seat now held by retiring Democratic Rep. Dave Loebsack, led the race 196,816 to 196,767.

Without officially calling for a recount, Hart’s campaign criticized the Lucas County crew for the way it handled the mistake and called on all counties in the district to carefully confirm results.

“As we have said all along, the most important part of this process is that we get this right, and that our election officials not put expediency ahead of accuracy with Iowans’ voices at stake,” Hart spokesman Zach Meunier said in a statement.

“Over the last several days, multiple consequential errors have materialized in this race that have serious implications for the district’s future representation,” Meunier said. “Given multiple errors found in Jasper and Lucas counties at the 11th hour, the counties should take special care to ensure that they have accurately counted every ballot and the totals are correct,” he added.

Meunier objected to Lucas County’s procedures, suggesting the mistake and a rush to certify the results may erode trust in the election.

“It is outrageous that Lucas would identify a race-defining change in the middle of the night the night before the county canvass, six days after the election, and then rush to certify results just hours later before accuracy has been ensured,” Meunier said. “Given the mistakes we’ve seen so far, the counties should not adopt results until they have taken the time needed to make sure they are absolutely correct. Anything less will perpetuate doubt around this election.”

There was no immediate reaction from Miller-Meeks campaign. One of her advisers, Eric Woolson, did not immediately return a call seeking comment. 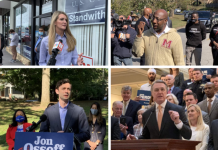