In a tweet, Miller-Meeks thanked voters, adding: “I will never quit fighting for you and your opportunity at the American Dream!”

Once again, I want to express my heartfelt gratitude to the voters of #ia02!

I will never quit fighting for you and your opportunity at the American Dream!

Hart’s campaign hinted it will challenge the results in court. It is the closest U.S. House race in Iowa since 1916.

“Under Iowa law, this recount process was designed to count ballots that had already been tallied, meaning that additional legal ballots may have yet to be counted,” Hart campaign manager Zach Meunier said in a statement. “Over the next few days, we will outline our next steps in this process to ensure that all Iowans’ voices are heard.”

The Associated Press said it would not call the race until all legal challenges are exhausted.

Monday’s certification followed a recount of the 24 counties’ results in southeastern Iowa. The recount added 143 votes to Hart’s total and 102 to Miller-Meeks’, AP reported.

Hart gained 26 votes in Scott County, where county supervisors raised concerns over the addition of 131 absentee ballots beyond an earlier canvass, AP reported.

“It’s not perfect,” said County Attorney Mike Walton. “There are questions that one side or another may want answered through a contest.”

Walton told AP the county had no choice but to certify the results by Monday’s deadline.

The campaign marked Miller-Meeks’ fourth run for the seat being vacated by Democratic Rep. Dave Loebsack. Miller-Meeks is a state senator and Hart, who ran unsuccessfully for lieutenant governor, had been a state senator. It was Hart’s first run for Congress.

Miller-Meeks has declared victory several times, including early the morning after Election Day, when she led by 282 votes before that margin narrowed to single digits since the election. At one point, after Jasper County fixed an error, Hart led. Miller-Meeks regained the lead after Lucas County also had to adjust results due to human error.

Hart has not conceded, saying she wants to ensure all legal ballots were counted.

Monday’s certification was for all legislative and federal offices. Secretary of State Paul Pate said Iowa’s record turnout of more than 1.7 million votes was among the highest in the nation at just under 76% of registered voters.

More than 1 million of those votes were cast by absentee ballots, smoothing election operations and protecting against the spread of COVID-19, Pate said.

All 99 counties had turnout of more than 65% of registered voters, Pate added. 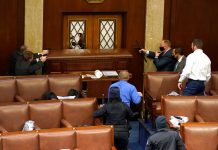