Democratic candidate Rita Hart on Tuesday detailed 22 alleged errors in the 2nd Congressional District race and asked the U.S. House of Representatives to recount the ballots and declare her the winner.

Republican Mariannette Miller-Meeks, making her fourth run for the seat, was certified as the winner by six votes by state officials after a series of miscounts and the correction of several other errors in multiple counties.

In a tweet Tuesday morning, Miller-Meeks said it is “shameful” Hart doesn’t accept voters’ decision in favor of Miller-Meeks. She also objected to a political appeal she said comes in a “hyper-partisan atmosphere.”

The winner of the Nov. 3 election, still not declared by the Associated Press, will replace retiring Democrat Dave Loebsack, who has held the seat representing southeast Iowa for 14 years.

Marc Elias, Hart’s attorney, said Tuesday a review of ballots made it clear that there are enough ballots legally cast but uncounted to make Hart the winner. Some of votes were not eligible for the recount because, due to errors by election officials, had been left out the initial count, he added.

For example, Elias objected to officials’ dismissal of ballots because of where they were signed, and others in which the voter received a sealed return envelope they had to unseal before voting.

“Every time the votes have been recounted, Rita Hart has gained ground,” Elias said during a news conference. “All we are asking is that all votes are counted.”

In a statement, Hart said all Iowans’ legal votes should be counted.

“As I have said from the beginning of this entire process, nothing is more important than ensuring every Iowan has their vote counted,” Hart said. “Everyone has acknowledged that there are uncounted votes left and after reviewing those ballots and making sure they are counted, it will be clear that I have won this election. It is crucial to me to make sure that this bipartisan review by the U.S. House is fair. Iowans deserve to know that the candidate who earned the most votes is seated. I am that candidate.”

This election has been decided by Iowans.

That decision should not be thrown into Washington’s hyper-partisan atmosphere.

It is shameful that Rita Hart does not have faith in Iowans, and does not respect the decision of Iowa voters. #ia02 pic.twitter.com/neq3kEA058

Miller-Meeks said on Iowa PBS on Dec. 4 that there were votes cast for Miller-Meeks that weren’t counted. She contended she won the race and laid out her agenda for her first term.

Tuesday morning, Hart officially asked the House to ensure all legally cast ballots are counted in the race.

Miller-Meeks and her supporters have said Hart has the right to appeal the result, but suggested she should have sent the matter to a panel of Iowa judges rather than appeal within the political system. Elias said the U.S. Constitution and a federal elections law both call on the House to determine who won contested elections.

The contested ballots, which contained votes for Hart, included:

— Two curbside ballots cast by voters with disabilities in Scott County who voted from their vehicles. Elias said that is legal.

— Nine absentee ballots cast by voters in Marion County whose votes were not counted initially and couldn’t be included in the recount. Some of those votes were for Miller-Meeks.

— One provisional ballot cast by a voter in Johnson County cast legally by the Nov. 9 deadline with proper identification but uncounted.

— One absentee ballot cast by a voter in Johnson County, which was rejected by election workers due to the location of a signature on an affidavit envelope.

— Two absentee ballots cast by voters in Johnson County who received sealed ballot envelopes and had to unseal them to cast their ballot.

— Five absentee ballots cast by voters in Johnson and Scott counties who have sworn under oath that they sealed their return envelopes but election workers rejected the ballots for not being “properly sealed.”

— Two absentee ballots cast by voters in Des Moines and Wapello counties who, despite placing their ballots in drop boxes by the deadline, had their ballots rejected because the drop boxes were in Linn County. 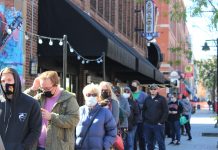