Iowa had the fifth-highest rate of positive coronavirus tests in the nation the past week, the Washington Post reported Tuesday.

At the same time, Johns Hopkins University reported Iowa administered the lowest number of tests per capita of any state: 67 per 100,000 residents.

Johns Hopkins officials noted that high positivity rates often mean a state is only testing the sickest patients, and not getting a full picture of the spread of the virus.

With 45.36% of the tests coming back positive, Iowa was running just 5 percentage points under the record of 50.68% set in the week ending Nov. 14, the university reported. Only Mississippi, Idaho, Alabama and Pennsylvania reported higher positivity rates.

That also could mean a recent upswing in activity, perhaps because of the holidays.

The data from the past two weeks, though, show cheerier trends.

Iowa posted steep drops in new cases (down 18%), deaths (down 23%) and hospitalizations (down 17%) over the past two weeks, the New York Times reported.

Nationally, the number of new cases and deaths in the past week each fell by 1%, and the number of hospitalizations rose by 10%, the Times reported. The nation has reported 20.8 million cases and 353,730 deaths since the pandemic started.

The Iowa Department of Public Health as of late Tuesday morning reported 582 patients hospitalized, up from 571 on Monday. There were 115 in intensive care Tuesday, down two from the day before. The 69 admitted in the past 24 hours was nine higher than the previous period. 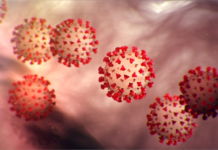