Home COVID-19 Iowa reclaims its title as the state with the lowest rate of...
Facebook
Twitter
Email
Print

The Washington Post reported Monday that Iowa has reclaimed its status as the state with the lowest rate of testing in the nation.

On a per capita basis, Iowa currently ranks last in testing among the 50 states, administering 586 tests for every 100,000 residents over the past seven days, according to the Post’s database. Only Puerto Rico, the Northern Mariana Islands and American Samoa have a lower rate of testing.

When the states are ranked by the raw number of tests given, Iowa ranks third from the bottom, behind South Dakota and Idaho.

Iowa reported only one coronavirus death and 515 new infections on Monday, continuing a trend that sees significantly lower numbers reported at the beginning of each week. The previous Monday, for example, Iowa reported one death, but as the week progressed, the number of deaths reported each day was significantly higher, in the range of four or five dozen.

Iowa’s weekend counts, which are reflected in the numbers that are reported each Monday, are lower because fewer sources of information are reporting their data to the state.

Over the past week, there has been an average of 1,141 new infections per day, which represents a decrease of 33% from the average two weeks ago, according to the New York Times’ COVID-19 tracker.

As of Monday afternoon, Iowa had recorded at least 313,485 infections and 4,487 deaths since the beginning of the pandemic.

Since Dec. 14, an estimated 191,183 doses of a COVID-19 vaccine have been administered in Iowa, and approximately 1% of the state’s total population has completed their vaccination. Currently, there are only 11 other states with a lower rate of vaccination than Iowa. 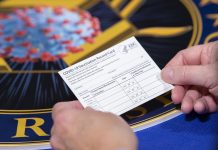