In the wake of two coronavirus-related deaths at six of Iowa’s state-run care facilities, the number of infections has dropped dramatically.

In November and December, the number of infections at the six facilities, all of which are run by the Iowa Department of Human Services, have reached their highest levels since the beginning of the pandemic. At western Iowa’s Glenwood Resource Center, home to 190 profoundly disabled individuals, infections increased 440% over four weeks in October and November.

At that time, the virus wasn’t much of a factor at three of the six facilities, but infections there rose dramatically in the weeks that followed.

For example, the Civil Commitment Unit for Sex Offenders had a cumulative total of 22 infections during the first eight months of the pandemic. But over the following 10 weeks, between mid-November and late January, that number grew to 142 cases.

The number of active infections reported by DHS at the six facilities has since plummeted, with all of them reporting zero to five infections among staff and residents combined.

Collectively, there are only 13 individuals — six workers and seven residents — at the six facilities who have contracted the virus and not yet recovered, according to DHS.

The cumulative total of all infections at all six of the DHS-run facilities, during the entire pandemic, is 858.

Here’s a look at how the cumulative total of staff and resident infections has grown at each of the six facilities since July 28: 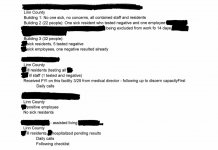 After two deaths and a series of outbreaks, infections drop in state-run care facilities