Special education associate Randy Davis said getting his first dose of the COVID-19 vaccine was “about as easy as it could be.”

Davis and his wife, Shelly Davis, both work in the Des Moines Public Schools system. They were on a waiting list for the district’s first vaccination clinic for teachers and staff, held Saturday in Central Campus gymnasium.

“They called us in at 10 o’clock and said come on down. I think a lot of it had to do with the weather today,” Randy Davis said, snow whipping around him.

MercyOne provided over 1,000 doses of the vaccine for Saturday’s clinic, according to Des Moines Public Schools spokesperson Phil Roeder. That’s double the amount the district initially expected for the event.

“That is great news for DMPS, as it means 20% of our employees will receive the first dose of the COVID-19 vaccine,” Roeder wrote in an email.

Teachers and school staff leaving the clinic said the vaccination process was simple and quick: They signed a consent form and got the shot, then spent 15 minutes under observation to be sure there was no adverse reaction.

“It took me three minutes to get from my van to where the woman was putting the needle in my arm,” said cafeteria worker Kim Leete.

Both the Pfizer vaccine, which MercyOne administered at Saturday’s clinic, and the Moderna vaccine require two doses administered several weeks apart to be over 90% effective. But for teachers, even a first dose was a reason to celebrate.

Leete said the switch wouldn’t change her routine in the cafeteria — she’ll just have more mouths to feed. But she was concerned for teachers who would have to accommodate more kids for longer periods of time.

“I like the hybrid, just because the class sizes are a lot smaller. Right now, my daughter has six kids in her class,” Leete said. “On the 15th, it’s probably more than going to double. They cannot keep six feet apart in a classroom.”

“I don’t think it’s gonna change much, to be honest,” he said. “I think we’ll probably get a few more kids in class, but as long as we’re following the safety protocols, I think it will be fine.” 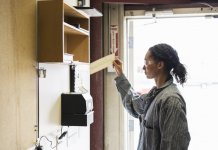 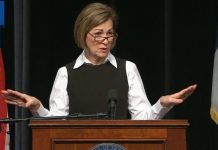 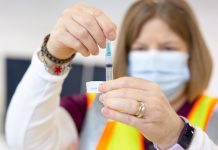