A slightly wetter than usual January did little to ease drought in the western half of Iowa, the Iowa Department of Natural Resources reported.

The state saw an extra 0.35 inches of precipitation in January, but also averaged 4 degrees warmer than usual.

The U.S. Drought Monitor reported  a small area of northwest Iowa was in extreme drought as of early this week. Basically the northwestern half of the state is either dry or in some level of drought. January usually is Iowa’s driest month of the year.

“Under the snow, the shallow soils are dry enough that there is the potential for drought issues later this spring,” the state’s drought-watchers reported this week.

“Despite the abundance of snow in January, there is concern over dry soils in western parts of the state,” Tim Hall, DNR’s coordinator of hydrology resources, said in a statement. “A dry spring could be problematic for parts of the state.”

Most rivers are running normally, but the Des Moines River system is running lower than normal, the state reported.

The U.S. Drought Monitor reported 52% of Iowa is in some form of drought or abnormally dry conditions, the same as last week but significantly below the 64% of three months ago. Nearly 620,000 Iowans live in areas now in drought.

State and federal officials plan an online public meeting from 1 p.m. to 3 p.m. March 4 to discuss the issues. 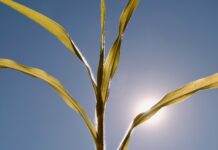