An Iowa county auditor who questioned how the state was spending millions of dollars earmarked for election integrity is now pursuing the matter in court.

In July 2019, Linn County Auditor Joel Miller, a Democrat, filed a public-records request with Iowa Secretary of State Paul Pate, a Republican. Miller noted that in 2018 the state’s deputy commissioner of elections notified counties that plans were being made on how to spend $8 million updating Iowa’s voter registration system. More than $1 million of that funding was to be spent in the fiscal year that had just ended, Miller wrote.

“A full year has passed and we have no indication as to how that $1.05 million has been used,” Miller wrote. He asked for copies of all correspondence on the matter between Pate’s office, vendors and public officials.

After 10 days passed with no response from Pate’s office to the public-records request, Miller filed a complaint with the Iowa Voter Registration Commission, alleging Pate had “taken no action” to overhaul the system, arguing that the system was vulnerable to hackers, and that a staffer in Pate’s office had informed him the formal process of seeking bids had not ever been initiated.

As part of that complaint, Miller noted that in August 2018, Pate announced plans to enhance cybersecurity with a $4.8 million federal grant through the Help America Vote Act.

States utilizing grants of that type are required by law to establish an administrative complaint procedure, so that any complaints about election integrity can be addressed at a hearing.

Pate didn’t file a response to the complaint, but he did file a motion asking the commission to dismiss the matter, arguing Miller had failed to state a claim upon which relief could be granted.

The commission heard arguments on Pate’s motion and ultimately decided on a 2-1 vote to dismiss Miller’s complaint without a hearing.

Although there was no hearing on the substance of Miller’s claim, the  commission stated the complaint amounted to “speculation, as opposed to fact,” and said “adequate technical security measures” exist to prevent hacking of the voter database.

Miller appealed the decision to Iowa District Court, arguing that the commission, rather than permitting Miller to present testimony and evidence to support his complaint, simply accepted “the unsubstantiated factual assertions” offered by Pate.

Miller cited language in the federal law that says, “At the request of the complainant, there shall be a hearing on the record.” He argued the commission had violated federal law and its own rules, and asked the court to send the matter back to the commission for a contested case hearing.

The commission, represented by the office of Iowa Attorney General Tom Miller, argued that even if Joel Miller was entitled to a hearing of some kind, the motion-to-dismiss proceedings had met the definition of a “hearing.”

On July 10 of last year, the two sides argued their case before Judge David Porter, who never issued a decision in the matter.

Last month, attorneys for the state filed a motion asking the court to dismiss Joel Miller’s appeal, noting that in the seven months since oral arguments had been made, the 2020 elections had been held. That, the state argued, had rendered the issue moot.

In written briefs to the court, Joel Miller’s attorney, Jim Larew, argued otherwise. He said although the 2020 election was over, the question of whether the commission could dispose of complaints without a hearing was “a matter of public importance” since the problem was likely to reoccur.

“The passage of time just has simply rendered this case moot,” Assistant Attorney General David M. Ranscht told Rosenberg. “There is no relief that can be awarded prior to the 2020 election.”

Larew said federal law required the commission to hold a hearing and that the underlying issue in the case — whether “$4.8 million of federal taxpayer funds were, or were not, appropriately spent” — had not been rendered moot by the election.

At the conclusion of Friday’s 30-minute hearing, Rosenberg told the attorneys he “will get a ruling out as soon as I can.”

Pate sent out an emergency directive, specifying that no voter identification information could be pre-printed on the absentee-ballot request forms. Miller and auditors in Johnson and Woodbury counties had sent out the forms with information such as voters’ names, addresses and personal identification numbers.

Iowa judges later granted the RNC’s motion for a temporary injunction preventing auditors from from processing those request forms. 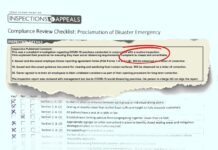