WASHINGTON — The House Agriculture Committee on Thursday heard about how Black farmers have faced decades of racial discrimination in their dealings with the U.S. Department of Agriculture.

The committee’s chairman, Rep. David Scott, D-Ga., said the testimony at the virtual hearing would help the panel craft legislation that aims to increase the number of Black farmers, as well as expand land owned by those farmers and help provide economic relief.

“This systemic discrimination continues to be felt by Black farmers today, who are still disadvantaged in USDA programs,” Scott said in his opening statement. “This festering wound on the soul of American agriculture must be healed.”

Lawmakers asked USDA Secretary Tom Vilsack, who appeared as a witness, questions about how the agency is helping Black farmers obtain loans, as well as how it’s addressing discrimination and providing economic relief.

“The history of systemic discrimination against Black farmers has been well-documented,” Vilsack, the former governor of Iowa, said in his opening statement. “Despite all that has been done, clearly more needs to be done to drive our efforts deeper.”

Vilsack pointed out that just 0.1% of Black farmers received any of the $26 billion in economic relief that went to farmers in a Trump administration USDA program that used funds from a COVID-19 bill and other sources. Of that portion, only $20.8 million went to Black farmers.

Vilsack, who previously served as secretary of Agriculture under the Obama administration, fielded anger and skepticism from Black farmers after his nomination. Those Black farmers argued that during his tenure he failed to adequately address racial discrimination and didn’t provide economic relief for Black producers.

His decision to wrongfully fire a civil rights icon and longtime advocate for Black farmers, Shirley Sherrod of Georgia, was also a sticking point. Vilsack forced her to resign from the USDA after a right-wing publication edited a speech Sherrod gave to make it seem that she was being prejudiced against a white farmer. When the full video surfaced, it showed Sherrod actually helped the farmer.

Sherrod was also a witness during the hearing, and she stressed that in order for Congress to rectify the decades of racism that Black farmers faced, lawmakers were going to have to be transparent about their methods and work to include those farmers in USDA policies. She currently works as an executive director for the Southwest Georgia Project, which is led by civil rights leaders to help provide education and assistance to grassroot organizations.

“There are so many barriers now because people have been kept out of the agency, so you gotta make them feel like they can come back there for help,” she said.

During the hearing Vilsack admited that there was racial discrimination at the agency and vowed to do better. He was not asked to address Sherrod’s firing.

He added that USDA is currently working to ensure that Black farmers have access to the nearly $10 billion in economic relief that was set aside for them in the American Rescue Plan that President Joe Biden signed into law earlier this month. The money set aside for Black farmers is intended to help with loan forgiveness.

John Boyd, of Baskerville, Va., and the president of the National Black Farmers Association, said it’s nearly impossible for Black farmers to stay in business when they are routinely denied loans or receive subsidies from the government, compared to white farmers.

Republican committee members Reps. Austin Scott of Georgia and Scott DesJarlais of Tennessee raised objections to the money set aside for Black farmers in the American Rescue Plan, arguing that allocating money to a certain group of people was discriminatory.

“My concern is, when we start to group certain people out because of the color of their skin, then it becomes harder to get anything done,” Scott said. “I think there are a lot of people that need the help.”

DesJarlais agreed and said farmers from different races, genders and religions also face discrimination and it wouldn’t be fair to leave those groups out.

“It’s the jobs of the courts to rule on discrimination and award damages, not Congress,” DesJarlais said.

Rep. Alma Adams, D-N.C., said the Supreme Court’s 1995 Adarand Constructors, Inc. v. Peña decision “held that government may use race-based remedies that are narrowly tailored to respond to the practice and effects of racial discrimination.”

The Department of Justice issued a memo that noted Congress “may be entitled to deference, when it acts on the basis of race to remedy the effects of discrinimation,” Adams said.

“That’s what we have in the American Rescue Plan,” she said, “Congress narrowly tailoring legislation to address well-documented, racial discrinimation against farmers of color.”

The ranking member of the committee, Rep. Glenn Thompson, R-Penn., said as the committee works on creating legislation to help Black farmers, it’s important to also look at how to fix discrimination that those farmers experienced at USDA. 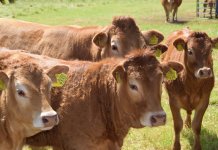