Iowa is in for a challenging mix of super-ragweed, floods, damaged crops and drought as the globe warms, three scientists said Tuesday.

The researchers appeared at this year’s virtual Iowa Water Conference.

Peter Thorne, head of the University of Iowa’s Department of Occupational and Environmental Health, said climate change will increase damage from flooding, drought, toxic algae and air pollution in the Midwest. He noted that the U.S. National Oceanic and Atmospheric Administration (NOAA) has found that the number of storms causing $1 billion or more in damage has increased in recent years.

The 22 warmest years on record have come since 1997, driving some of the change in weather patterns, Thorne added. Rains have become heavier and come in fewer storms. That has led to both flooding and to sewage overflows, another health threat. In some cases, families returning to their flooded homes have faced mold-related illnesses and carbon monoxide poisoning from generators.

The change in weather patterns have changed some plant life, leading to a very productive strain of ragweed, which irritates those with hay fever, the scientists said. And pests such as the lone star tick have become more common in Iowa, sometimes carrying disease.

The damage in Iowa and the rest of the globe could be made worse by a slow response to climate change, Thorne said.

For example, projections that the globe will lose one-third of its species by 2050 as the climate changes could worsen because of a lack of action to address the concerns over the past few years. “So the longer we wait to begin with serious mitigation, the harder it will be to adapt,” Thorne said.

Thorne said the health effects of climate change are a pressing global issue. “Climate change produces serious adverse health effects that have enormous societal costs and we don’t often include these in the calculations of our losses attributable to climate change,” he said. “These need to be considered as we move forward with increasing seriousness.”

President Trump withdrew from the Paris Agreement on climate change and promoted the use of fossil fuel. President Biden has moved to rejoin Paris, and to shift to renewable fuels for energy production and to power vehicles.

Sylvia Secchi, associate professor in UI’s Department of Geographical and Sustainability Sciences, has been researching the increased toll climate change and related environmental problems have taken on tribes and other populations.

“We must focus more specifically on equity issues, and what it means to involve communities that have been historically marginalized in this planning process,” Secchi said.

Eugene Takle, an emeritus professor of agronomy at Iowa State University and one of the state’s top climate modelers, agreed with Thorne that delaying action on climate change would mean more trouble.

“Climate change is a social, humanitarian, economic crisis predicted by experts but made worse by a failure to act proactively on those warnings,” Takle said.

By mid-century, climate change will be damaging agriculture in many ways, Takle said. “The model suggests that there will be longer heat waves” and lower yields for crops, for example.

The water conference continues through Thursday. 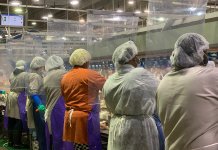