WASHINGTON — Georgia’s new voting law was at the center of Tuesday’s U.S. Senate Judiciary Committee hearing, where senators discussed restoration of a key section in the Voting Rights Act that would prevent states, mostly in the South, from changing their election laws without federal approval.

During the more than four-hour hearing, witnesses opposed to the sweeping new Georgia law warned that if Congress did not modernize and pass Section 4 of the Voting Rights Act, then voters of color would be disenfranchised. The Georgia law limits absentee voting, restricts drop boxes to inside early voting locations except during a public health emergency, and makes it illegal to hand out food and water to those waiting in long lines to cast their ballots.

“Record numbers of Georgians used their voices and voted in the last election,” Sen. Raphael Warnock, a Georgia Democrat who testified as a witness, said at the hearing. “And in response to this swell in Democratic participation, politicians in our state legislature responded not in celebration but with retaliation.”

Warnock was joined by other Georgians at the hearing, including Stacey Abrams, the founder of Fair Fight Action, an organization that works to reduce vote suppression, and Republican state Rep. Jan Jones, the speaker pro tempore of the Georgia House who sat on the Special Committee on Election Integrity that crafted the state’s controversial 98–page voting bill.

“We should be deeply concerned by the aggressive and naked attempt to wrest control away for purely partisan purposes,” Abrams said.

Georgia became the subject of national controversy for its flurry of proposed voting restrictions that followed baseless complaints of election irregularities peddled by former President Donald Trump and many supporters after losing the November election to President Joe Biden by 12,000 votes.

Georgia’s 2020 election cycle was the most secure in the state’s history, according to GOP Secretary of State Brad Raffensperger. Biden’s victory was confirmed by machine and hand recounts three times.

Abrams said that if Georgia’s current law had been in place during the 2020 election, then the presidential election could have had a different outcome.

Sherrilyn Ifill, the president and director-counsel for the NAACP Legal Defense and Educational Fund, Inc., added that even if civil rights organizations could file lawsuits to get new voting laws overturned, elections would still be affected, as litigation can take years.

“In the years during the pendency of a case, thousands, and in some cases, millions of voters are disenfranchised,” she said. She added that since a pivotal 2013 Supreme Court decision, her organization has seen a wave of laws enacted with the intent to suppress Black and other voters of color.

In 2013, the Supreme Court struck down the heart of the Voting Rights Act — section 4 — in a 5-4 vote. That section created a formula to determine if racial discrimination had been more prevalent in certain states and required those states to receive clearance from either the Justice Department or federal government before enacting changes to voting such as polling places, procedure and redrawing congressional districts.

The Supreme Court directed Congress to create a new formula and pass it into law, which has yet to be done.

Ossoff, who was mentored by voting and civil rights icon the late Rep. John Lewis, D-Ga., asked Abrams how the new Georgia law affects runoff elections. Ossoff won his runoff against former Republican Sen. David Perdue with 50.3% of the vote compared to Perdue’s 49.7%.

She said that in runoff elections, Georgia voters have had three weeks of early voting. Under the new law, that’s cut to one week.

“To claim that it is an expansion of access to a majority of Georgians is not only untrue, it is misleading and it is false,” she said.

Jones, the Georgia state legislator, argued that the bill was crafted to make it easier to vote and ensure election integrity. She defended the provision that prevents snacks from being passed out within 25 feet of a polling station, saying that in the past, campaign workers have handed out water or food displaying their candidate’s message.

The bill does allow poll workers to set up self-serve water stations for voters to use, but it’s not a requirement.

“It’s a practice referred to as ‘line-warming,’ and while not technically illegal it surely violates the spirit of free elections,” she said. “The fact is that most states have a prohibition of activities considered to be campaigning or electioneering within a protected space.”

Most Senate Republicans at the Judiciary hearing took issue with its title: “Jim Crow 2021: The Latest Assault on the Right to Vote.”

Ranking member Chuck Grassley, an Iowa Republican, argued that it was offensive to Republicans, since they support voting rights.

“Like others on this committee I am a fan of history,” Grassley said in his opening statement. “I try to learn from it. I don’t use it to insult my opponents.”

Grassley, along with Sen. Josh Hawley, a Missouri Republican, said the decision by Major League Baseball to move the All Star Game from Atlanta was an overreaction caused by Democrats’ response to the state’s new voter law. They faulted Biden for referring to the new voting bill as “Jim Crow.”

Sen. John Kennedy, a Louisiana Republican, questioned Abrams on how she could know the Georgia law was racist.

She said some provisions of the bill were grounded in racial animus, especially when it came to mail-in ballots, as the state had heavily used vote by mail and early voting for 15 years.

“It was only after voters of color for the first time in 15 years successfully used those provisions in favor of the party they disproportionately supported that those rules changed,” she said.

“Voters of color in Georgia were more likely than white voters to vote by mail for the first time in the last two election cycles,” Abrams said. “Suddenly SB 202 shows up and shorts the time period to request a return in absentee ballot (application) and imposes new restrictive ID requirements that will have an amplified effect on disabled voters, older voters, voters of color and Black Georgians in particular.”

Across the country, a massive introduction of voter ID requirements and restrictive voting laws is being led by the GOP at the state level.

Senate Majority Leader Chuck Schumer said in a statement that voting rights would be a priority for his party, and criticized not only the new Georgia voting law, but the hundreds of restrictive voting laws sponsored by Republicans making their ways through state legislatures.

“And these laws are moving through state legislatures all across the country, including the most recent one in Georgia, which, among other so-called crucial reforms, makes it a crime — a crime — to provide food and water to voters waiting in line at the polls, even though in minority areas the lines are often much longer because there are fewer polling places,” he said. 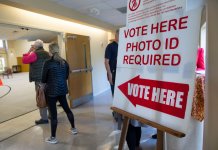 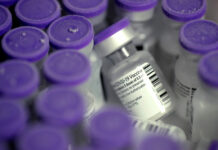 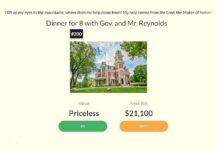