An Iowa man is not entitled into a new civil trial tied to a moonshine-fueled bachelor party that “devolved into discord and violence,” the Iowa Court of Appeals has ruled.

Court records indicate that in 2017, Colby Newman of Mt. Pleasant planned a bachelor party for his brother, Spencer Newman, and that Colby’s cousin, who worked as a manager at Mt. Pleasant’s Press Box Grille and Bar, loaned the Newmans a small bus for the party.

On Oct. 21, 2017, the prospective groom and his friends set out for the evening, with Jacob Schroeder serving as the group’s non-drinking, designated driver. The others drank as they travelled from one location to the next to eat and drink, and all of them, except for Schroeder, later reported they became intoxicated during the night.

At one point, a disagreement broke out as to where the group should head next. Most were in favor of heading home, but one of the men, Dustin Kindig, wanted to go to a strip club.

Spencer went to the front of the bus to speak to Dustin and Jacob. As Spencer later recalled in a deposition, he told the two he had made “the executive decision that we needed to go home.” Spencer and the other partygoers would later recall Dustin responded by pushing Spencer and then hitting him in the head with a glass bottle that shattered. The two men fought on the floor of the bus as Jacob pulled the vehicle over. Dustin got off the bus, as did Joshua Burns, and the two engaged in a brief physical altercation.

Dustin had a different recollection of how the events unfolded, claiming Spencer shoved him and hit him in the face with a bottle before Joshua  punched him in the face several times. According to Dustin’s version of the story, the other partygoers then drove off without him, abandoning him on the street just as the wail of police sirens drew near.

The claims against Jacob, Colby and The Press Box were dismissed. The remaining claims of battery by Spencer and Josh went before a jury, which ruled in favor of the defendants.

Dustin appealed, arguing in part that the court erred in permitting Spencer and Josh to argue self-defense; erred by improperly allowing testimony of his prior bad acts; and erred by denying a motion for a mistrial.

On the first point, the Court of Appeals found that Dustin could not have been “prejudiced or unfairly surprised” by the defendants’ claim of self-defense, and that the district court did not abuse its discretion in allowing that defense.

As to the testimony by Jacob, Spencer, Josh, and Colby about Dustin’s propensity for violence — one of the witnesses claimed to have seen Dustin get kicked out of bars for fighting and had seen Dustin hit others with an unopened beer can, a pool cue, a pool ball and a baseball bat — the court noted that in civil cases, evidence of an alleged victim’s violent tendencies can be offered on the issue of self-defense.

On the issue of a mistrial, Dustin’s lawyers noted that the defense had asked the pool of potential jurors whether they had strong feelings about guns. One juror replied, “I don’t like them,” adding that they may have a place in war. Another potential juror said, “I think everybody should carry one … Everyone should have one to defend themselves.”

After the jury was selected for the trial, the court ruled that any evidence of firearms would not be admitted in the case.

Then, during the trial, Spencer was asked to tell the jury about personal experience he had with Dustin being violent. In response, Spencer said, “Some that I can’t talk about, but—,” at which point Dustin’s attorney interrupted and asked for a mistrial. The judge denied the request.

“While Spencer’s comment could have tipped the jury off that there may be more to the story, it did not inject any new specifics into the story, and it was not so prejudicial as to necessitate a mistrial,” the Court of Appeals found.

As for Dustin’s claims against Jacob, the court agreed with the district court that as the designated driver, Jacob’s duties didn’t include protecting passengers from violence.

“Requiring more of designated drivers by expanding their duties from sober driving to ensuring the physical safety of passengers against the acts of third parties would provide an unwarranted disincentive to socially beneficial behavior,” the Court of Appeals quoted the district court as saying. “The implications of imposing additional duties on designated drivers are clearly not in the public interest and other state courts have found the same.”

Court records indicate that immediately after the bachelor party broke up, Kindig was transported to UnityPoint-St. Luke’s Hospital in Cedar Rapids for injuries that he said stemmed from “being assaulted with a large glass moonshine bottle.” Kindig later sued the hospital, and the medical professionals who treated him, for malpractice. The case was dismissed after Kindig’s lawyers failed to file the required expert-witness affidavit alleging the medical standard of care had been breached.

According to court records, Kindig has criminal convictions for assault causing bodily injury, disorderly conduct by fighting or violent behavior, and assault while displaying a dangerous weapon. 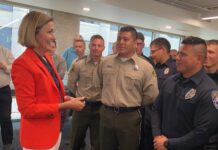