Local businesses are seeing a rush of post-pandemic bookings from summer dates to years in the future, and couples are contacting venues earlier on in the planning process to ensure they have dates, said Jasper Winery Wedding Coordinator Sydney Tallman.

“We’re seeing a lot of people reaching out right when they get engaged because they are worried the dates they want are going to be booked,” she said. “A lot of people are planning a venue a lot sooner than we’ve seen in the past.”

Debbie Rohrer, wedding director at St. Ambrose Cathedral, said this is a common trend as 2021 weddings look vastly different than last year’s. In 2020, wedding parties at the cathedral allowed 10 people in the church, including the presider and a wedding photographer.

“When the word got out that weddings scheduled for 2020 were being cancelled, postponed, rescheduled or celebrated again in 2021, we were flooded with calls to get dates booked for not only the 2020 wedding couples, but those who were originally planning on a wedding in 2021 or 2022,” Rohrer said. “We have more weddings this year than we have had in the last five years.”

When Gov. Kim Reynolds initially issued an emergency proclamation on March 17th, 2020, gatherings of more than 10 people were prohibited in the state. “Planned large gatherings and events must be canceled or postponed until after termination of this disaster,” the proclamation stated.

As weddings return this summer, 350 people can celebrate with bridal parties at the St. Ambrose Cathedral, which holds 550 people. During the height of the pandemic, Rohrer said 15 couples proceeded with having their weddings on their originally planned date.

Some chose to schedule a second wedding celebration with hopes of inviting their original guest list, while others did not. The church is already receiving bookings for 2022 faster than normal, Rohrer said.

A new way to plan weddings

While the pandemic changed people’s lives drastically, Tallman said it also forced her industry to evolve. Wedding planning now requires more flexibility when sifting through different options to celebrate, Tallman said, recalling panicked calls from parties as they watched their plans slip away in 2020. As the pandemic worsened and got better at various times, Tallman helped those parties sort through their planning options.

Venues are not the only businesses seeing renewed interest in larger weddings and pivoting their businesses to accommodate more people again. Couples are booking spaces early to secure dates, but are hiring other businesses later on.

Bella Flora Event Design has seen a trend of spontaneous couples hiring wedding planners later on in the process, said owner Kelly Thomason. The entire industry is “upside-down and overwhelmed,” she said.

“The trend from last year that is carrying through was the last-minute nature, where there wasn’t much time in advance to plan,” she said. “People are much more spontaneous and we get calls on Mondays to do weddings on Fridays and Saturdays. The lack of time people were working with was highly unusual last year and we’re seeing some of that.”

Businesses are having to turn away couples and are reaching out to others for help, said Sharla Fraker-Zubulake, owner of Vanity and Glamour Cosmetics.

Fraker-Zubulake and her team are making sure they don’t take on too many events this summer, but she said several cosmetic businesses in the Midwest are overbooked and seeing last-minute requests to work celebrations.

“We are getting really busy, and we’re finding that people are booking shorter term than normal, since people didn’t know they were going to be able to have normal weddings this year,” she said. “I’m seeing lots of makeup artists in the Midwest reaching out to other artists because they need help when people decide to have bigger weddings at the last minute.”

A shift in contract language

New provisions are being added into contracts to ensure COVID-19 and other future pandemics are accounted for at venues, said Dennis Groenenboom, owner of The Thoreau Center.

“We have, in our contracts, that if there are health guidelines that have to be followed, the person who is renting the space is responsible for those,” he said. “At this point, the governor has lifted them all, so there aren’t a lot to be followed.”

Tallman said Jasper Winery added provisions into contracts to ensure couples have a venue if they need to postpone their celebrations due to exposure to COVID-19. While the provisions were added early on in the pandemic, they have been left in to guarantee both parties are as flexible as possible in case of outbreaks or other pandemic-related issues, she said.

A backlog of wedding celebrations

During 2020, several businesses saw postponements that remain on the books. Bella Flora Events Design functioned at 65%, Thomason said, compared to a normal year. Vanity and Glamour Cosmetics usually handles 50 to 100 weddings annually, Fraker-Zubulake said, but their services were only used 30 times in 2020.

Venues are no different. Tallman said Jasper Winery typically holds 35 celebrations, most taking place in the summer months in its outdoor space; last year, 17 went through as planned or were changed to “microweddings” with fewer guests than originally planned.

The Thoreau Center assisted with only three of the four ceremonies that were originally planned at their location in 2020, Groenenboom said.

With weddings returning in full swing, Tallman said this year is all about focusing on what bridal parties want after many of their plans were altered in reaction to COVID-19.

“We are really trying to focus in on the couple and what they’re vision is,” she said. “Something with COVID was that a lot of people had to change their plans. A lot of traditional elements of weddings were changing, so we’ve been trying fun, unique ideas and using our spaces differently than before to make what the couple wants for that day to happen.” 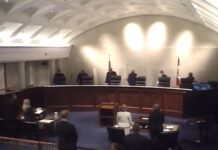