Haley, a possible 2024 presidential candidate, told the audience at the Iowa Republican Party’s Lincoln Dinner in West Des Moines that Democratic President Joe Biden has ushered in a “rise in socialism.”

“The Democratic Party has become the socialist party,” Haley said. “The proof is everywhere. Joe Biden doesn’t get it. A tax cut for business means a wage cut for workers.”

The former South Carolina governor added: “We need to bring companies back to America. We don’t need to be sending them away.”

Gas and milk prices are up, and “no end is in sight,” Haley said.

Haley said Biden’s pandemic relief and infrastructure bills are a “liberal wish list. The national debt now is bigger than our economy. That hasn’t happened since World War II.”

She said America is “on the fast track to going broke,” and “Joe Biden makes Barack Obama look like a conservative.” 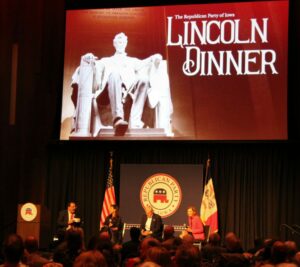 Haley said she would support Iowa’s first-in-the-nation caucuses, if South Carolina remains a leader in the primaries. “You mess with us, we’ll mess with you,” she said with a laugh.

On another topic, she supported boycotting the 2022 Beijing Olympics, and warned of threats to Taiwan from the Communist power. “Communism always loses to freedom,” Haley said.

She is not of fan of Biden’s approach to Russia leader Vladimir Putin. “All Biden did was give Vladimir Putin a big, fat kiss,” said Haley, who served as U.N. ambassador under President Donald Trump. Trump faced widespread accusations he was too politically cozy with Putin.

Haley became embroiled in controversy when she criticized former President Donald Trump for his efforts to overturn the election, though she softened her statements later. She launched her Stand for America PAC in January, The Hill reported.

National polls have raised the prospect the 2024 race could be between Vice President Kamala Harris and Florida Gov. Ron DeSantis if age or other factors take President Joe Biden and Trump out of the race, Forbes reported last month. Haley was pulling 5% in a poll by GOP firm Echelon Insights, trailing DeSantis, former Vice President Mike Pence and Sen. Ted Cruz of Texas, according to Forbes.

In a Politico/Morning Consult poll, Haley came in at 4%.

Haley has said she would step aside in the 2024 presidential race if former President Donald Trump runs. “I would not run if President Trump ran, and I would talk to him about it,” Haley told the Associated Press at a press conference in April. “That’s something that we’ll have a conversation about at some point if that decision is something that has to be made.”

Forty-one percent of poll respondents said they would definitely not vote for Trump if he won the nomination again.

Haley kept relatively quiet in public about the twice-impeached Trump’s actions in office, but criticized Trump after a Jan. 6 attack on the U.S. Capitol he is accused of inciting.

Perry Beeman has nearly 40 years of experience in Iowa journalism and has won national awards for environmental and business writing. He has written for The Des Moines Register and the Business Record, where he also served as managing editor. He also is former editorial director of Grinnell College. He co-authored the recently published book, "The $80 Billion Gamble," which details the lottery-rigging case of Eddie Tipton.