AMES, Iowa — James Cheek stands in the batter’s box and awaits the pitch.

As the beep-emitting ball approaches, he swings the bat and makes contact. From then on, it’s a race between the runner sprinting toward a base and fielders scrambling to grab the ball and lift it up in the air before he reaches his goal.

In Beep Baseball — a coed game adapted for visually impaired athletes — it’s either a run or an out.

Cheek, who lives in Ames, has been blind since he was a toddler, nearly 20 ago. He’s been playing the sport for the Iowa Reapers since 2016.

“I just like hitting the ball,” Cheek said. “For me, it’s fun, it’s enjoyable, it’s good exercise. It’s a good way to interact with people face to face.”

Eight teams from seven states across the country gathered this weekend in the Iowa Invitational at the Southeast Recreation Complex at Iowa State University in Ames. Players with various levels of experience participated in a major tournament as the Beep Baseball World Series approaches later this summer.

There are 32 sanctioned teams in the United States playing the sport. Countries such as Taiwan, Canada, France and the Dominican Republic also have programs. The World Series will be played July 25-Aug. 1 in Wichita, Kansas.

Beep Baseball has similarities between baseball and softball, but there are major differences, too.

Six players to a side bat and field, rather than nine. The softball-sized ball repeats a beeping pattern to enable athletes to hit and field. There are two bases, which resemble football tackling dummies, that also beep.

Sighted teammates have a role. Pitchers and catchers both are able to see to allow athletes to bat. Pitchers tell the batters when the ball’s on its way and hope to give them hittable pitches.

Teams are allowed up to two sighted players per game, in case they are short of athletes. Teammates who are sighted are positioned in the field to monitor play and help keep everyone safe.

The origins of sport date back to the 1960s, when Charles Fairbanks, an engineer for a phone company, sliced into a softball and implanted a beep-emitting device.

The Iowa Reapers, who are based in the Des Moines area, lost their opening game to the Indianapolis-based Indy Thunder 12-0 Friday.

The Thunder are the New York Yankees-dynasty of Beep Baseball, winning four World Series in a row prior to last year’s cancellation due to COVID-19.

Many of the Thunder players attended the Indiana School for the Blind and Visually Impaired in Indianapolis and have been teammates for years.

Their experience shows as they slap the ball into the outfield, dive into bases at full speed and quickly track down balls to force out their opponents in seconds.

Batters in Beep Baseball have a tough job. They use a regulation bat to line up in the batter’s box next to home plate. They try to make contact with the pitch, knocking the ball deep enough into fair territory to give them a chance for a hit.

The two bases that emit beeps instruct the batter where to run — it can be either one in a first or third base position. They’re 100 feet from home plate.

While they’re running, with an out or a run on the line, they have to make contact with the base. Some athletes grab the padded 5-foot-tall base; others dive into it in a headlong charge.

Price, whose father and grandfather also are umpires, began working games in 2012, when he was 14. The Price family regularly works World Series, including the two held in Ames in past years.

Beep Baseball can offer athletes a chance to play sports when there may not be many options. It also gives them an opportunity to enjoy a game loved by many people.

Price said he once watched a teenaged player for the New Jersey Titans who had been blind since birth score his first-ever run in a game. The runner reached base and yelled.

“To hear the kid’s screams of excitement and joy for scoring his first run, it almost brought everyone to tears,” Price said.

The Iowa Reapers’ players are aged 23 to 51, said captain John Patterson of Des Moines. Opportunities are available for a variety of skill levels and ages.

“As long as they’re 14 or above, they can play with us in the World Series,” said Patterson, who has been playing since 2011.

Among the players for the Reapers is Hannah Lundeen, the state director of Adaptive Sports Iowa. She is not visually impaired, but played with a thick blindfold-like mask to fill out the lineup.

Lundeen, who grew up in the Des Moines area, studied therapeutic recreation at the University of Northern Iowa. She wanted to help bring sports to people with disabilities.

“I kind of knew it was my calling,” Lundeen said.

The game can be challenging for sighted individuals. They aren’t used to playing without vision and can be bothered by background noise or finding the beeping ball while playing in the field.

Pitchers are just 30 feet away from home plate — less than half the distance in a regulation baseball game — and are subject to being hit by line drives.

How Beep Baseball is played

Basics: Six players bat and play the field per team, not including sighted pitchers and catchers. Batters try to reach base before fielders gain control of the ball. Batters can strike out or hit the ball into play. There’s a 12-run rule; at that point, the trailing team continues batting through six innings.

Equipment: The ball is the size of a softball and emits a chirping beep for batters to swing and fielders to pick up. When there’s a hit, one of two bases — the batter doesn’t know which until they beep — signals where the player should run. Players wear uniforms and frequently use batting gloves.

Pitching: Pitchers are sighted teammates of batters and both players work together. There’s a 30-foot distance from pitcher to home plate.

Batting: Batters use a bat to help find a good position in the batter’s box. The pitcher advises the batters when to swing.

Baserunning: One of two bases will beep when contact is made between the bat and ball. Cables run the 100-foot distance from the scorer’s table to the base. If a technical glitch such as a loose cable or delayed signal occurs, it’s called “late base,” and the batter gets another swing.

Fielding: There are six players in the field, usually of two rows of three players. To record an out, a fielder must grasp the ball and hold it up in the air away from his or her body. The umpire signals an out. 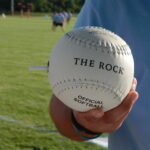 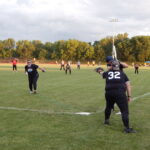 A Gateway Archers pitcher delivers to a batter Friday in an Iowa Invitational game at Ames. (Photo by John Naughton for Iowa Capital Dispatch) 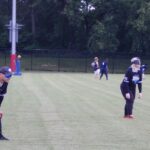 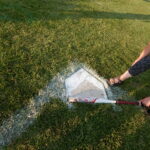 A batter lines up a softball bat next to home plate to orient his or her batting stance. (Photo by John Naughton for Iowa Capital Dispatch) 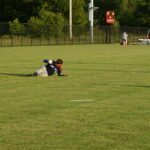 If a fielder can control a batted ball before the runner reaches base, it’s an out. (Photo by John Naughton for Iowa Capital Dispatch) 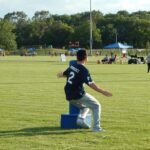 An Indy Thunder runner contacts the base. In Beep Baseball, batters who reach base before a fielder gains control of the ball score a run. If the fielder holds up the ball before the runner reaches base, he or she is out. (Photo by John Naughton for Iowa Capital Dispatch) 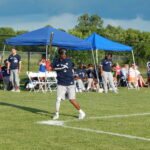 An Indy Thunder batter awaits a pitch in Friday’s 12-0 win over the Iowa Reapers. (Photo by John Naughton for Iowa Capital Dispatch) 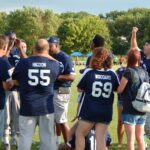 The Indy Thunder get fired up before Friday’s Beep Baseball game against the Iowa Reapers. The Thunder, who have won four World Series titles in a row, beat the Reapers 12-0. (Photo by John Naughton for Iowa Capital Dispatch) 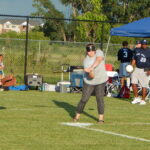 Hannah Lundeen of the Iowa Reapers bats in Friday’s game against the Indy Thunder. (Photo by John Naughton for Iowa Capital Dispatch) 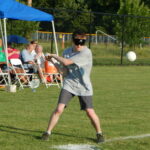 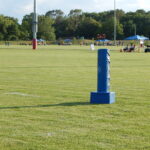 The two padded bases in Beep Baseball resemble football tackling dummies. They emit beeps for the runner to target them. (Photo by John Naughton for Iowa Capital Dispatch)

: A pennant for the National Beep Baseball Association is displayed at the Iowa Invitational Friday at the Southeast Recreation Complex in Ames, Iowa. (Photo by John Naughton for Iowa Capital Dispatch) 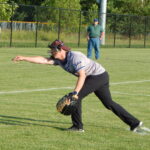 An Iowa Reapers pitcher delivers the ball Friday. In Beep Baseball, players who are not visually impaired pitch and catch while their teammates bat. (Photo by John Naughton for Iowa Capital Dispatch)

John Naughton covered Iowa high school and college sports for the Des Moines Register for 31 years. He retired in 2019 and is currently a Des Moines-based freelance writer.