When torrential rains tore apart Middle Tennessee, Tropical Storm Fred hit the Gulf Coast and Henri hit the northeastern U.S. all in one week of August 2021, the scope of the deaths, injuries and damage quickly overwhelmed local resources. Federal disaster declarations came even before the storms hit, and governors in affected states have called for federal help for the recovery.

A few months earlier, the city of Newnan, Georgia, just southwest of Atlanta and about 30 minutes’ drive from my home, was struck by a devastating tornado. The milewide tornado traveled 40 miles on the ground in the early hours of March 26, resulting in at least one death, damage to 1,750 houses and at least US$75 million in estimated recovery costs.

I know some of the survivors whose homes suffered considerable damage, including a former student. After weeks of personally emailing senators and representatives to press for action, I was relieved on May 5 when President Joe Biden declared several Georgia counties disaster areas.

But state and local officials were stunned to learn that only local and county governments – not members of the public – would be eligible for federal recovery funding. “According to FEMA, the impact to homes and individuals from the March 26 tornado was not significant enough to warrant individual assistance from the federal government,” the Newnan Times-Herald newspaper reported.

Back in 2001, economists Thomas A. Garrett and Russell S. Sobel found that “nearly half of all disaster relief is motivated politically rather than by need,” with “states politically important to the president” having more disaster declarations, and federal recovery spending higher in “states having congressional representation on FEMA oversight committees.” It seemed fair to ask if the federal response in Georgia might have been different in an election year.

As a political scientist, I’ve researched not only American politics, but also tornadoes and hurricanes for evidence of climate change. I wondered if Garrett and Sobel’s conclusion from 20 years ago still held. I analyzed all 61,864 FEMA cases from 1953 through the 2021 disaster declaration for Coweta County, where Newnan is, and seven other Georgia counties. In my research, I found that sitting presidents do tend to make more disaster declarations during their reelection bids. 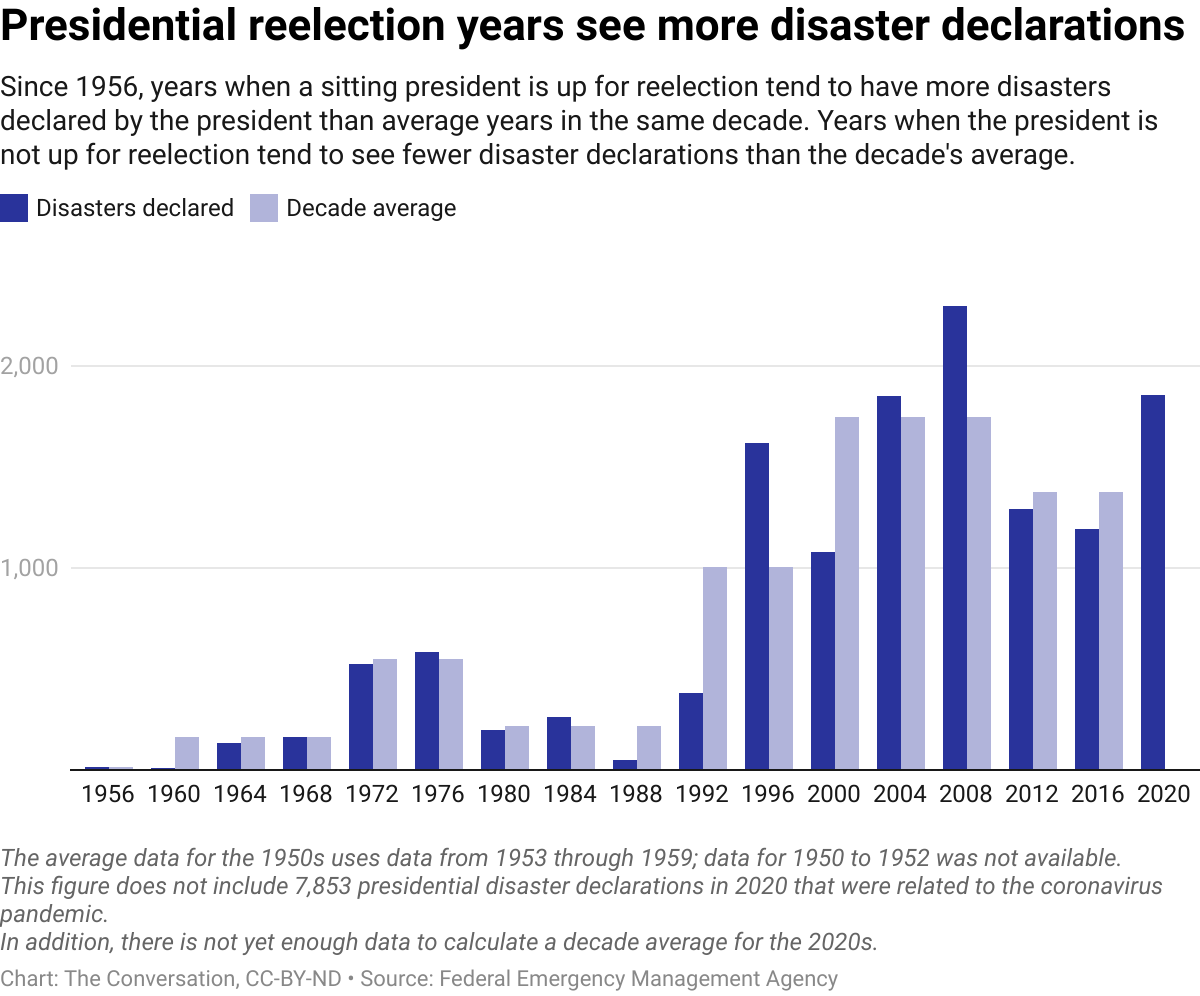 It was a different story from 1984 to 2016, when in four of nine cases, the election-year disaster declarations beat the decade average.

Things got clearer when I looked at who was running. Of the seven years when the incumbent was seeking reelection, five of them saw higher-than-average disaster declarations – Dwight Eisenhower in 1956, Gerald Ford in 1976, Ronald Reagan in 1984, Bill Clinton in 1996 and George W. Bush in 2004. The other two presidents who sought reelection in that period, Lyndon Johnson in 1964 and Barack Obama in 2012, declared fewer disasters than the decade average.

In addition, election-year disaster declarations tend to move much more quickly. Stephen Gruber-Miller of the Des Moines Register, from the politically pivotal state of Iowa, wrote in August 2020 after a derecho hit the state, “Of the 26 presidentially declared disasters in Iowa since 2008, not counting the derecho, it took an average of 24 days from the start of the disaster until the state submitted a request for a presidential disaster declaration, and an average of another 15 days from when the request was filed until it was granted.”

I examined Gruber-Miller’s data, and found that the three of the four fastest disaster declarations were in election years: a 2008 flood, that 2020 derecho and COVID-19 in 2020. The other was a 2019 flood, the third-fastest disaster declaration in Iowa during this time period. Former FEMA Director James Lee Witt was right when he said in congressional testimony in 1996, “Disasters are very political events.”

John A. Tures is a professor of political science at LaGrange College in Georgia. He has written for academic journals on international and domestic politics, as well as Yahoo News, Huffington Post and The Observer.