Iowa is among states with an obesity rate among adults of at least 35%. (Photo courtesy of the U.S. Centers for Disease Control and Prevention)

WASHINGTON — The number of states with high obesity among residents has nearly doubled since 2018, according to new data Wednesday from the U.S. Centers for Disease Control and Prevention.

There were 16 states that had obesity rates among adult residents of at least 35% last year, with Iowa, Ohio, Delaware and Texas on that list for the first time. That’s an increase from 12 states in 2019 and nine states in 2018.

Iowa’s rate was 36.5%, according to CDC data. The rate was significantly higher, 45.4%, for non-Hispanic Black adults.

Officials with the Association of State and Territorial Health Officials described the obesity rates as having hit all-time highs, and that they signal how the COVID-19 pandemic exacerbated the decades-long pattern of obesity in the U.S.

“Our attention on COVID-19 diverted us from focusing on chronic disease prevention, which we need to get back to,” said Marcus Plescia, chief medical officer at the association. “We must get back on track to assure that we have the policies, systems and environments in place to support equitable access to physical activity opportunities and nutrition security for all.”

As recently as 2012, no state had an adult obesity rate above 35%, according to the Trust for America’s Health, a D.C.-based health policy organization.

Last year, more than 20% of adults in every state were obese, according to the CDC. 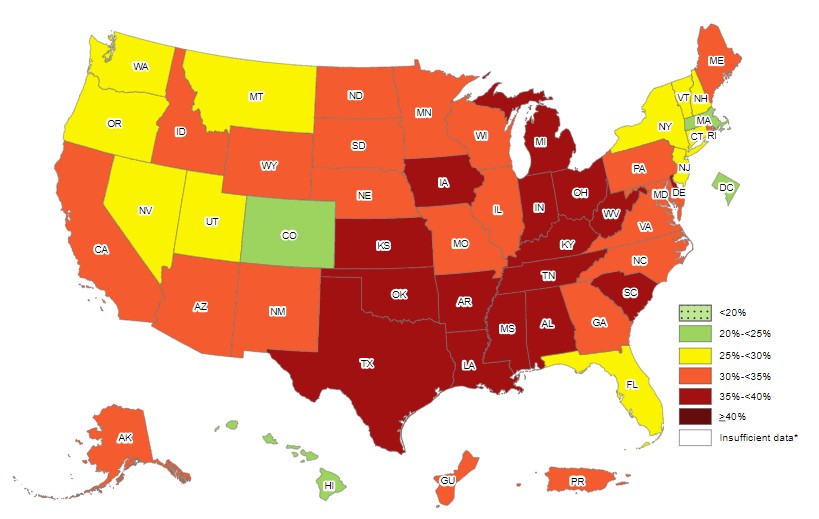 Mississippi had the highest rate nationally, at 39.7%.

Colorado had the lowest obesity rate, at 24.2 percent.

Others in the lowest tier — between 20% and 25% — were Hawaii, Massachusetts, and the District of Columbia.

The obesity rates are based on self-reported height and weight data gathered through telephone surveys on health-related risk behaviors, chronic health conditions, and use of preventive services.

Among adults without a high school degree, obesity rates were 38.8%, while it was 25% among college graduates.

The Midwest and South had the highest levels of obesity among residents, at 34.1% in each region.

Western states had a rate of 29%, with 28% among residents in the Northeast.

Laura covers the nation's capital as a senior reporter for States Newsroom, a network of nonprofit outlets that includes Iowa Capital Dispatch. Her areas of coverage include politics and policy, lobbying, elections, and campaign finance.