Instructions for voting at Lutheran Church of the Good Shepherd on Nov. 3, 2020. (Photo by Linh Ta/Iowa Capital Dispatch)

Iowa Attorney General Tom Miller, along with 21 other attorneys general, on Monday sent a letter to bipartisan congressional leaders urging them to pass legislation protecting against both voter suppression and election subversion and possibly reform the filibuster.

“Following the 2020 presidential election, we witnessed something many of us considered unthinkable: an attempt by the then-sitting President of the United States [Donald Trump], assisted by certain state elected officials, to steal a presidential election,” the AGs write. “We, the undersigned 22 attorneys general, write to emphasize that the peril to our democracy did not end on Inauguration Day, with the transfer of power from one administration to another. To safeguard our democracy, it is vital that Congress act promptly —including, if necessary, to reform the filibuster — to pass legislation protecting against both voter suppression and election subversion.” 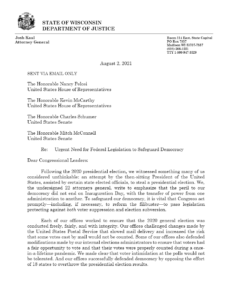 “Each of our offices worked to ensure that the 2020 general election was conducted freely, fairly, and with integrity. Our offices challenged changes made by the United States Postal Service that slowed mail delivery and increased the risk that some votes cast by mail would not be counted,” the attorneys general write. “Some of our offices also defended modifications made by our internal elections administrators to ensure that voters had a fair opportunity to vote and that their votes were properly counted during a once-in-a-lifetime pandemic. We made clear that voter intimidation at the polls would not be tolerated. And our offices successfully defended democracy by opposing the effort of 18 states to overthrow the presidential election results.”

The AGs write that Trump did not succeed in 2020 because “the legal arguments made by those seeking to overturn election results were generally so extraordinarily weak that they did not have even the veneer of legitimacy” and some Democratic and GOP election officials “refused to buckle under pressure at critical points.”

However, the coalition argues that federal legislation is necessary to strengthening voting protections and prevent election subversion. As the Advance has reported, Republicans in 48 states, including Iowa, have bills clamping down on voting rights. They also note the growing right-wing movement for so-called election audits, as have been proposed in Michigan and other states.

“The truths upon which this nation was founded are self-evident. They are not self-executing, however. The profound challenges confronting our democracy demand that Congress act to prevent voter suppression and election subversion. Irrespective of one’s views on the value of the filibuster in general, it must not be allowed to stop Congress from addressing these issues so fundamental to our Constitution and democracy,“ the letter concludes.

This story is republished from Michigan Advance, which is part of States Newsroom, a network of news bureaus supported by grants and a coalition of donors as a 501c(3) public charity. Michigan Advance maintains editorial independence. Contact Editor Susan Demas for questions: [email protected] Follow Michigan Advance on Facebook and Twitter.
X

Susan J. Demas is editor-in-chief of the Michigan Advance. She is a 21-year journalism veteran and one of the state’s foremost experts on Michigan politics, appearing on MSNBC, CNN, NPR and WKAR-TV’s “Off the Record.” She is also the Advance’s chief columnist, writing on women, LGBTQs, the state budget, the economy and more. Most recently, she served as Vice President of Farough & Associates, Michigan’s premier political communications firm. For almost five years, Susan was the Editor and Publisher of Inside Michigan Politics, the most-cited political newsletter in the state.